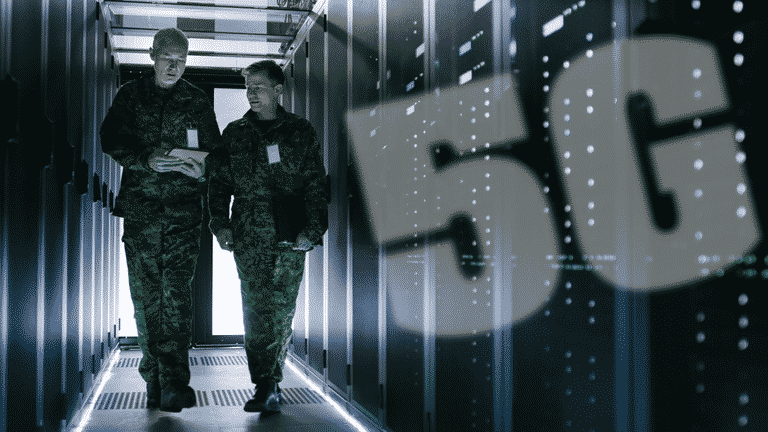 Please Share This Story!
PDF 📄
The unprecedented collaboration between Technocrats in the military establishment and their counterparts in the corporate world is on full display to empower the Internet of Things across America. This process is driven by the White House. ⁃ TN Editor

After a remarkably fast interagency review, the White House today announced a massive transfer of electromagnetic spectrum from military use to commercial 5G. It will be the “fastest transfer of federal spectrum to commercial use in history,” US Chief Technology Officer Michael Kratsios told reporters proudly this afternoon. But, Kratsios and Pentagon CIO Dana Deasy assured reporters ahead of the announcement, the rush won’t compromise military readiness or operations.

The 100 megahertz of spectrum runs from 3450 MHz to 3550, so-called mid-band frequencies prized by 5G developers because they allow longer-ranged transmissions than the millimeter-wave spectrum that makes up most of what’s been available in the US so far. Kratsios and other officials  told reporters shortly before this afternoon’s announcement that the move would dramatically expand 5G access for all Americans – fulling a congressional mandate in the 2018 MOBILE NOW Act – and strengthen potential competitors to Chinese giant Huawei in the global market.

That’s a wide range of military functions, many with life-or-death significance for either training safety or outright combat. Deasy and other officials didn’t detail how the Defense Department would work this massive transfer. Their remarks, however, suggested a mix of migrating military radars to other frequencies – a complex and costly process typically funded from a share of the FCC auction – and sharing frequencies with commercial users in specific times and places.

The White House formally made the request in April. Roughly 200 technical experts from all four armed services, the Office of Secretary of Defense, and the White House Office of Science & Technology Policy studied the problem for 15 weeks. The FCC, which has already endorsed the plan, will start auctioning the spectrum off in December 2021, Kratsios said, with commercial use beginning “as soon as mid-2022.”

That’s as fast as the transfer can possibly go through the FCC’s public rule-making process, officials said. Historically transferring spectrum takes six years or more. ““The timeline that we’re working with is absolutely unprecedented,” one senior administration official told reporters, “and I cannot underscore that enough.”

Many members of Congress want the Pentagon to transfer or share spectrum for commercial use, with the 2018 Act sponsoring a National Telecommunications & Information Administration (NTIA) study on how to transfer 255 MHz of spectrum to 5G and other broadband services by 2022. But others are pushing back, especially after the FCC’s controversial recent decision to transfer spectrum to Ligado that might adversely affect GPS navigation.

When today’s press call opened to questions, I asked how the Department of Defense can be confident it can transfer so much spectrum, so quickly, without disrupting training and operations?

While this specific review went quickly, “the DoD has been focused on mid-band spectrum sharing opportunities with FCC and NTIA for years,” a senior administration official replied. The NTIA study sponsored by the MOBILE NOW Act laid a lot of the groundwork for the military’s review, they said. So did the previous interagency work on the transfer of Citizens’ Band radio in the adjoining 3550 to 3650 MHz spectrum: The science and engineering concerns for that slice of spectrum, the official said, “were very similar what we’re going to have to do here.”

That previous work made it possible to jumpstart this transfer, the officials said. But a great deal of detail remains to be thrashed out.

With this and the hundreds of satellites indiscriminately deployed in space by Musk & Bezos we are screwed. Once Bill gets his vaccines chips in you the globalists will have have won. Even if mankind wakes up how can we stop it?

It is not the globalists that are behind this, it is Satan. The greatest lie today being taught is that Satan does not exist. He is the enemy of man, and God. If people would read the Bible they would see this. Don’t tell me it was written by mere man, that is a ridiculous argument especially if you have never read it cover to cover, preferably the King James. It is the only way to know the only One true God and He has preserved it for us. It is 1/3 prophecy, no other book is 100% accurate in… Read more »

(Ephesians 6:12) “For we wrestle not against flesh and blood, but against principalities, against powers, against the rulers of the darkness of this world, against spiritual wickedness in high places.”

(1 Peter 5:8) “Be sober, be vigilant; because your adversary the devil, as a roaring lion, walketh about, seeking whom he may devour:”

Great, now we can stream DEW’s so much faster than ever before!