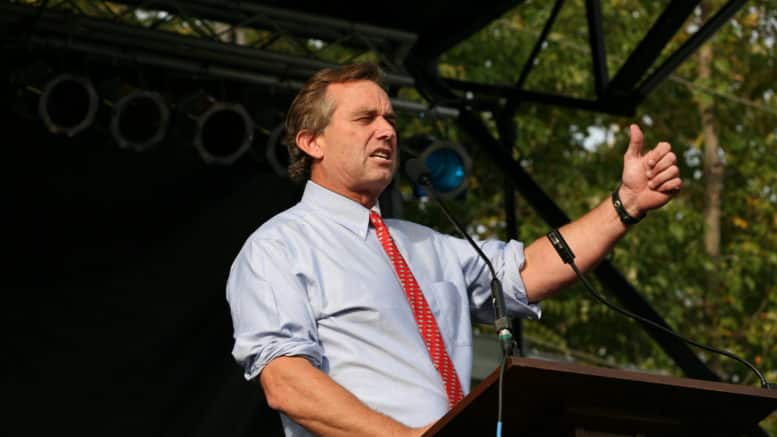 Yes, it’s that Robert F. Kennedy, Jr., son of the late Robert “Bobby” Kennedy, who is leading the national anti-vaccine movement. Big Tech routinely censors him, his followers and anyone who writes critically of vaccines. ⁃ TN Editor

Cara Hathaway left her job as a speech therapist because she said she couldn’t work in a hospital and speak out against the vaccine manufacturers she believes are doing more harm than good.

A bad reaction to the vaccine for human papilomavirus and a miscarriage after she was vaccinated for the flu motivated Hathaway to learn more about what has become a heated national debate over whether vaccinations should be required for school children and adults in some work places.

Public health experts and the Centers for Disease Control and Prevention are clear: vaccines are safe and effective. Still, fears of side effects and chronic illness have stoked a vocal anti-vaccination movement that came to the Ohio Statehouse on Wednesday.

About 120 activists, many of them wearing red, listened in the atrium as a panel of speakers described the ways they believe regulators and pharmaceutical companies are hiding the truth about the damage vaccines cause.

The anti-vaccine event’s headliner was Robert F. Kennedy Jr., founder of Children’s Health Defense, who has become the celebrity face of the national anti-vaccine movement.

“We have the most aggressive vaccine schedule in the world and we have the sickest children in the developed world,” Kennedy said at the event, chastising pharmaceutical companies, regulators and lawmakers.

Rep. Ron Hood, R-Ashville, is sponsoring a bill that would prevent employers from taking adverse action against workers who refuse to be vaccinated for medical reasons or “reasons of conscience,” including religious beliefs.

Similar proposals targeting flu shots have fizzled in committee in previous sessions of the General Assembly.

The Ohio Hospital Association is “concerned that this legislation threatens the health and safety of patients, employees and the community,” said John Palmer, the organization’s spokesman, in an email.

The American Medical Association earlier this month adopted a policy to expand its policy to advocate for regulation and policies to incentivize states to eliminate non-medical exemptions from mandated pediatric immunizations.

Supporters lauded Hood’s bill and spoke out against an amendment in the Senate version of the state budget that would remove a religious and philosophical exemption for vaccinations of children at private schools.

Senate President Larry Obhof, R-Medina, said has not delved deeply into vaccination policy, but is willing to discuss it with House leadership and Republican Gov. Mike DeWine.

“If you are a private institution, you also have rights to decide what the rules are for attending those institutions,” Obhof said of the budget provision affecting private schools.