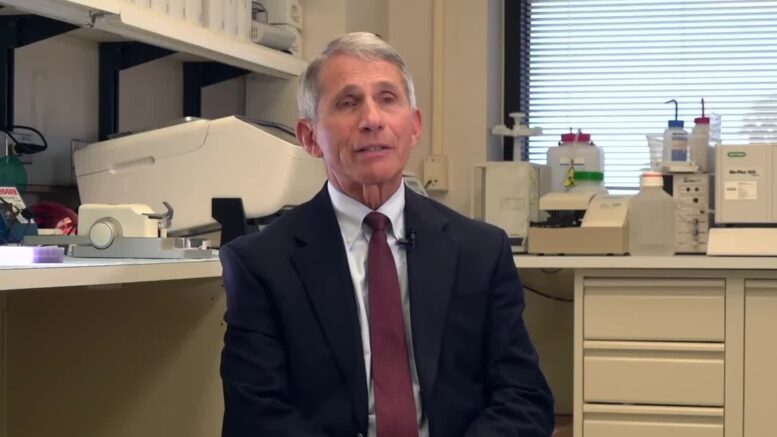 Please Share This Story!
PDF 📄
Technocrats can flip-flop on their scientific crystal ball just as fast as any carpetbagger politician can read the political tea-leaves. The only reality they acknowledge is their own, and their goals justify the means to achieve them. ⁃ TN Editor

Dr. Anthony Fauci has been reluctant to support a federal mask mandate.

“A national mandate probably would not work,” he said on Sept 15 during a news conference with Vermont Gov. Phil Scott.

Fauci, the director of the National Institute of Allergy and Infectious Diseases, has been urging Americans to use masks for months. “I have trust in the American people that if we put a strong emphasis on the importance of wearing masks, that we will come around and do that and get that percentage up above the relatively low percentage of people that are using masks,” Fauci said on July 21 on NPR’s Morning Edition.

A ‘building distrust’ in public health agencies is ‘the elephant in the room,’ Fauci says.

But he has said before that he doesn’t think a federal law would be the way to go.

“I don’t like to be authoritarian from the federal government, but at the local level, if governors and others essentially mandate the use of masks when you have an outbreak, I think that would be very important,” Fauci told Alabama Sen. Doug Jones during a Facebook live event in July.

“Well, if people are not wearing masks, then maybe we should be mandating it,” the leading infectious disease expert told CNN’s Erin Burnett Friday.

ARREST FAUCI NOW FOR HIS PAST CRIMES and the CURRENT CRIMES!

I prefer to ban weasel Anthony Fauci from public discourse.

Will this mandate apply to Mr. Fauci as well? He has been seen and photographed not wearing a mask in public gatherings. Sauce for the goose….

Why are we even listening to these morons ??

Who is listening to these morons ? —I’ll tell you who —–Most of the brainwashed and dumbed down people of the world , and I estimate that to be at least 80=90% of the world’s population . Face it, most people are docile and WEAK and are like little slaves waiting for their master to tell them what to do. I will tell you another thing, If you are wearing a mask and closing down your business and staying in your house because some CRIMINAL bureaucrat tells you too —–YOU are part of the problem. ALL you cowards out there… Read more »

Please make an article showing how outcomes are independent of policy across countries and regions:

People need to understand that there is no magic control of corona-type germs, and at the very least we should separate our political stance from this issue.

There is NO ISOLATION PURIFICATION OF THE EXISTANCE OF SARS-COV-2. It is a fraud. There is a influenza. Wake up Mr. It is uninformed people like you that buy into the media/politician plandemic hoax. http://www.worlddoctorsalliance.com http://www.everydayconcerned.net http://www.stopworldcontrol.com Dr. Thomas Cowan, Dr. Andrew Kaufman, Dr. Carrie Madej, and thousands & thousands of physicians & scientists world wide are being censored! The virus is the seasonal influenza now labeled Covid-19. Viruses don’t spread in the air. Viruses are exesomes sucreted from your own bodies cells pooping out the toxins and this happens not from snot contamination from a sick person- or kissing-… Read more »

I really wish that POTUS Trump would END this CRIMINAL POS….NOW!!!!!

A Jesuit said, that Jesuit Fauci has a great poker face. You understand they lie. The only thing that Jesuits worship is the Pontif, the Pope. Their allegiances are to the Pope only, they are his army! It’s called the Society of Jesus. Let me tell you, that they are not Christian. They have stolen the title of ‘Christian’. They don’t even believe in the Holy Bible, they are wicked. They were thrown out of most countries and now there are back big time. See here their constitution: https://www.bibliotecapleyades.net/vatican/esp_vatican13.htm. See also here: The Jesuit agenda against the true church and… Read more »

There’s already a nationwide mask mandate — 98% of the population wears them. Do they somehow believe the 2% that doesn’t is preventing a cure? Sounds like they’re determined to double down on a failed policy.

Jim —that is because MOST people of the world are that brainwashed and unable to think for themselves. It is beyond PATHETIC how all these supposedly ‘tough guys’ are just doing what they’re told by a CRIMINAL SYSTEM and wearing a mask. It tells me they were NEVER that tough and will submit to ANY form of humiliation and can’t even comprehend what is being done to them —–It works the same in ALL countries —-Peoples belief in FALSE AUTHORITY. No one has a right to RULE you and tell you how to live your life, and by peoples inability… Read more »

Seems to me that we already have a national mask wearing mandate. Amazing how the masks were suppose to slow or stop the spread of coronavirus. And yet in 80 degree plus weather. Covid 19 infections were supposedly on the rise and allegedly still are. Has anybody noticed that tyrants, bureaucrats and technocrats are showing no concern for other viruses and diseases that are sickening and killing more people than covid19 is? You’d think that covid19 is the first and only health threat humanity is or has ever faced. The devil is in the details. The existence of covid19 (probably… Read more »

Everyone I see is wearing a mask. What is the need to make this an E.O.?? except to exert more, ongoing oppressive, unnecessary and ineffective suppression of our freedoms. If masks worked, COvID would be gone by now unless its being spread throughout the country by a couple of people who do not fastidiously adhere too mask-wearing. The last estimate I saw of people who mask up is 94%. And, most people who resist mask-wearing are rioters and young people who seem highly-resistant to COvid. 94% is pretty good compliance if you ask me. I can’t wear a mask for… Read more »

Fauci is a Psychopath.