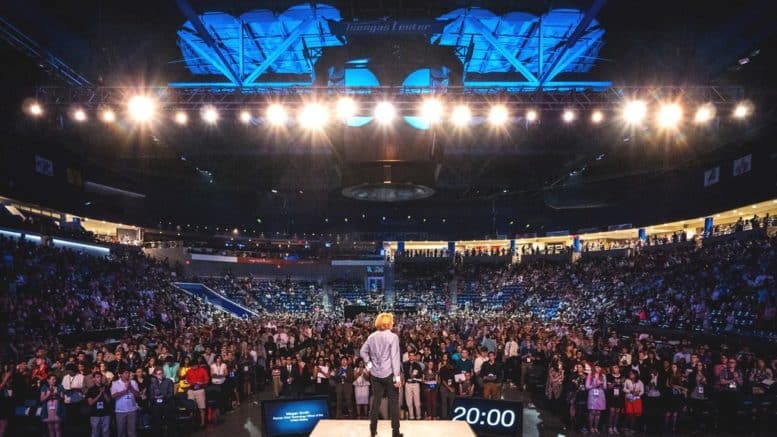 If data exists in any form, you can be sure there will be Technocrat data hoarders close at hand to harvest it.  The unrestricted use and spread of very personal data belonging to minors puts them at risk for the rest of their lives because once public, the data can never be re-protected. This will eventually happen with DNA data as well. ⁃ TN Editor

Three thousand high school students from across the United States recently trekked to a university sports arena here to attend an event with an impressive-sounding name: the Congress of Future Science and Technology Leaders. Many of their parents had spent $985 on tuition.

Months earlier, the teenagers had received letters, signed by a Nobel Prize-winning physicist, congratulating them on being nominated for “a highly selective national program honoring academically superior high school students.”

The students all had good grades. But many of them were selected for the event because they had once filled out surveys that they believed would help them learn about colleges and college scholarships.

Through their schools, many students in the audience had taken a college-planning questionnaire, called MyCollegeOptions. Others had taken surveys that came with the SAT or the PSAT, tests administered by the College Board. In filling out those surveys, the teenagers ended up signing away personal details that were later sold and shared with the future scientists event.

“It wasn’t like I sought out filling in my information for the College Board to sell to other companies,” said Adriana Bay, 19, a sophomore at Vanderbilt University this fall who was solicited by the future scientists event when she was in high school. “You are giving them the liberty to profit off your information.”

Consumers’ personal details are collected in countless ways these days, from Instagram clicks, dating profiles and fitness apps. While many of those efforts are aimed at adults, the recruiting methods for some student recognition programs give a peek into the widespread and opaque world of data mining for millions of minors — and how students’ profiles may be used to target them for educational and noneducational offers. MyCollegeOptions, for instance, says it may give student loan services, test prep and other companies access to student data.

These marketing programs are generally legal, taking advantage of the fact that there is no federal law regulating consumer data brokers. They also face little oversight because federal education privacy laws make public schools, and not their vendors, directly responsible for controlling the spread of student data.

But the handling of student surveys is receiving heightened scrutiny, particularly in the wake of revelations about Cambridge Analytica, a voter-profiling company that siphoned off the data of Facebook users who took a personality questionnaire.

In May, the Department of Education issued “significant guidance” that recommended that public schools make clearer to students and their parents that surveys with the SAT and the ACT, a separate college admissions exam, are optional. The notice emphasized that pretest surveys could provide opportunities for families to learn about college choices. But it also reminded schools that parents had the right to inspect all surveys in advance. Parents also have the right to opt their children out of any school-required surveys that touch on sensitive topics like religion, family income or politics.

The new federal guidance could give school districts and state education agencies “leverage to push the College Board and the ACT to either eliminate the voluntary survey when it’s being given in a school,” said Amelia Vance, director of education privacy at the Future of Privacy Forum, an industry-funded think tank, “or take out any questions that would be considered sensitive in a particular state.”

Over the last few years, several states have passed laws that might also limit the spread of some student profiles. The laws generally prohibit online educational vendors to schools from selling students’ personal data or using it for targeted advertising.

More than three million students who graduated in 2018 took surveys with the ACT, the SAT or the PSAT, which is a college scholarship test given to high school juniors. The College Board charges educational institutions 43 cents per student name. Starting in September, the ACT will charge 45 cents per name.

As marketing materials on the ACT site put it: Purchasing the names of “racial and ethnic minorities is a great way to increase diversity at your campus.” Other survey services, however, sell students’ personal information far beyond colleges.

Scholarships.com, for instance, asks students for their name, birth date, race, religion, home address and citizenship status and whether they have “impairments” like H.I.V., depression or a “relative w/Alzheimer’s.” Scholarships.com also has a subsidiary, American Student Marketing, that describes itself as the “exclusive broker” of the student data collected by Scholarships.com, offering it to marketers of student loans, credit cards and smartphones.