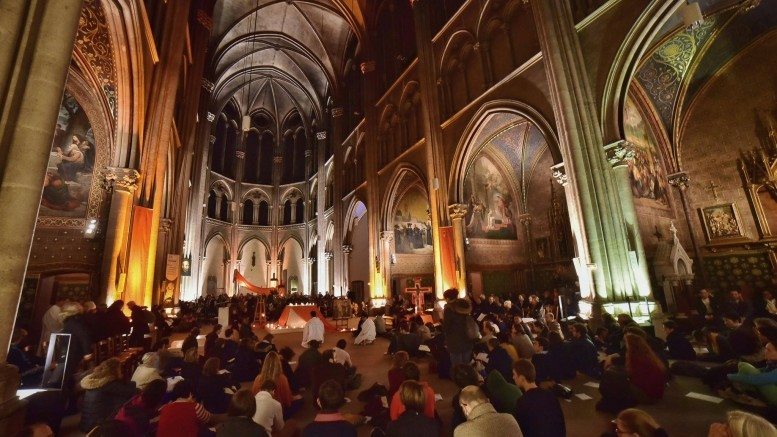 TN Note: The Global Warming creed smacks of high religion, where the shamans hide behind a curtain even though they are the very ones who are creating doctrines that everyone else is expected to believe without questioning. Christianity has been banned over separation of church and state issues, but the High Church of Global Warming has become the new state religion that the Feds will enforce without remorse or guilt.

As this edition of the Post hits the stands, the great Conclave of Catastrophists in Paris will have concluded. The last goose will gladly have surrendered its swollen liver — foie gras does not come without exertion — to the last epicure environmentalist. We have been told that the French did not stint on lending all the arts of its fabled cuisine to assist the Great Deliberators. State dinners took on something of the largesse and abundance last recorded by Gibbon in his descriptions of the Emperor Heliogabalus, who is reputed to have served up the tongues of hummingbirds, peacock brains and mice sauteed in honey, to the jaded appetites of his decadent court.

The reference here to far earlier times is not accidental or flip. Just as in the early centuries of Christianity, when the patristic Fathers struggled with various heresies and sought to stabilize the dogmas of the then-nascent Faith, held their great Councils to parse the finer points of esoteric doctrine, the Parisian analogue gave itself over to even more subtle ruminations: whether, for example, it was best to “commit” to ensuring the planet’s temperature doesn’t rise more than 1.5 degrees by the year 2100, or whether it was best merely to hold the thermometer to a more expansive two degrees.

How much mental energy must have been expanded over that winsome 0.5 degrees, 80 years down the road? The subtleties involved, the logical intricacies deployed, would have outpaced Aquinas and sent poor Augustine to bed early with a migraine. However, the modern monks of the High Church of Global Warming have resources that the early philosophers and theologians could not even dream of — they have computer models that dance in the direction wished of them.

And when what they deliciously refer to as the “settled science” does not serve their needs, they have always about them the ancient texts of Earth in the Balance by Reverend Al Gore, or the early press releases of the Dun Scotus of Global Warming, Cardinal Emeritus George Monbiot.

And where the scholiasts of old, wrestling with imperfect transcriptions and dubious translations of Holy Scripture had only prayer to guide them on the knotty questions of global warming — such as how many polar bears can dance on the edge of an ice floe — the priests of Climatology can always consult the Oracles of Greenpeace and the Sierra Club; or when in deeper need — say on the relationship between the decline of the coral reefs and bovine flatulence — refer to the obiter dicta of Bishops Tutu or Suzuki, on which matters such authorities speak with a Truth beside which that of Scripture is a mere contrail.

I don’t know if i have this in its rightful place but wouldn’t it be a good thing to reign in the US CORP as much as possible before we are all living in HELL!? I know that the bill would be left for the sheeple, but its these very sheeple that have allowed this viscous empire to be built in the first place, or at least they fell for every trick handed to them without any real resistance. For the millions that have tried to warn all the others, well, you should be in charge of things if anyone… Read more »