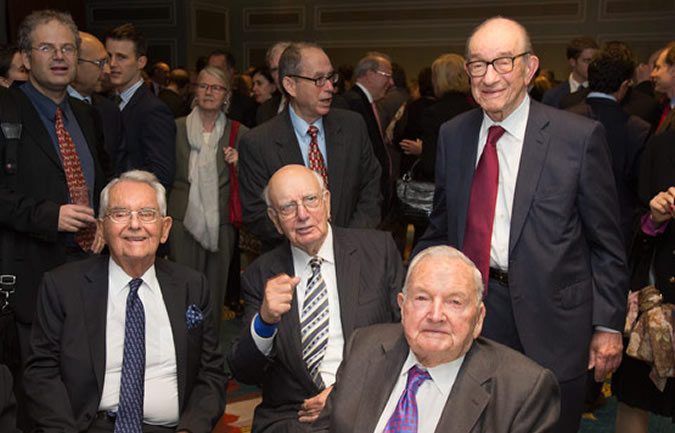 Please Share This Story!
PDF 📄
The elitist nature of the Trilateral Commission has not changed since its founding in 1973 by the late David Rockefeller and Zbigniew Brzezinski. As its principals and original architects, they missed the “Great Reset” of the global economy by only a few years. ⁃ TN Editor

It was during the summer of 2019 that the Trilateral Commission published an eight page brochure called, ‘Democracies Under Stress: Recreating the Trilateral Commission to Revitalize Our Democracies to Uphold the Rules-Based International Order‘. As I mentioned in an article published back in February, the brochure spoke about how the institution was now dedicated to ‘rediscovering‘ its roots, ‘sharpening‘ its mission and ‘rejuvenating‘ its membership.

This apparent attempt at modernising came in the wake of the deaths of the Trilateral Commission’s two founding members – David Rockefeller and Zbigniew Brzezinski – and also that of former European Chairman of the Commission Peter Sutherland.

On reading the literature, it was plain to see that the group were working to ensure its long term survival by seeking the next generation of corporate, political and academic members, all in a bid to maintain the goals of it’s founding fathers, which include the implementation of a ‘New International Economic Order‘.

Ever since its inception in 1973, the policy of the Commission has been that membership is by invitation only. Third party applications have never been welcomed. That is until now.

In a July 2020 press release titled, ‘Trilateral Commission Invites Applications for New American Members‘, the institution confirms that for the first time ever they are ‘issuing a public call for applicants for membership‘. An extract from the press release reads:

Traditionally, the Trilateral Commission has only solicited nominations for membership from existing members. As part of the Commission’s recent efforts to refocus its critical mission and rejuvenate its extraordinary activities, it is now issuing a public call for applications to its United States group.

The North American Chair of the Commission, Meghan O’Sullivan, had this to say:

We are excited to further strengthen and diversify the Commission’s ranks. Our members include people with remarkable experience in the public and private sectors, extraordinary intellectual acumen, and energy and passion for the world. While we welcome those who have reached the pinnacle of their careers, we are also intensely interested in people who still have another chapter – or more – to come.

We are also informed by the Commission that spanning their 47 year existence, they have secured members who share the group’s ‘common values and a commitment to the rule of law, open economies and societies, and democratic principles‘.

So is the decision to appeal for new members a sign that the institution genuinely wants to democratise? Does it really want to open itself up to a broader range of individuals? Is this the opportunity that the common man has been waiting for, to muscle in on a carefully selected band of elites and with it bring a much needed level of public scrutiny?

Everything was going so well in the press release until the fourth paragraph. First we are told that prospective members must be U.S. citizens, which is fine considering the invitation for applicants is for the American branch of the Commission only. The request for applicants to send in a biography or curriculum vitae is also standard. But then comes a heavy dose of reality:

They are also required to obtain one nominating letter from a Trilateral Commission member from North America, Europe, or Asia and at least one additional letter from a member or non-member. Recommenders should send their letters to membership@trilateral.org.

So your only hope of getting onto the Trilateral Commission is if you personally already know someone who has a seat at the table. How’s that for ‘rejuvenating‘ the membership? Clearly your application only stands a chance of progressing if you know the right people. After 47 years, the Commission is not about to compromise itself by throwing the doors wide open to the public. Yes, they will accept new applicants into the fold. But only those who have been meticulously vetted and believe unconditionally in the Commission’s values. What they do not want are outsiders who risk unsettling – or even infiltrating – the institution. Whichever way you look at it this is elitism 101. What we would call in the UK Jobs for the Boys.

The objective of bringing in a new era of talent is also demonstrated by the Commission seeking applications for its David Rockefeller Fellows program. The criteria for this reads:

The Commission seeks applicants 35 years old or younger who show keen interest in national and global issues and strong potential for future leadership. DRFs join the Commission’s annual meetings and have other opportunities to engage with its membership.

This appears to be about both nurturing and grooming the next generation of the Trilateral Commission. The fact that fellows are permitted to attend annual meetings and ‘engage‘ with the membership supports this notion. It will allow current members to sound out those who have the potential to further the cause of globalisation, and if he or she adds value then they could progress up the corporate ladder and become fully fledged members of the institution. Whether they become a CEO, an executive director of a multi national or a banker, in some manner they will hold a level of influence over a particular sector. After all, it is very common to find members of the Trilateral Commission sitting on the board of corporations, councils and think tanks. This is one of the ways that the Commission exerts power over the legislature, and why it is no coincidence that the beliefs of the group end up permeating the national conversation.

Let us not forget what is one of the overriding objectives of the Trilateral Commission. Soon after the Commission was formed, former member Richard N. Gardner (a former U.S. Ambassador to Spain and Italy) wrote an essay for Foreign Affairs magazine (the official publication of the Council on Foreign Relations). In ‘The Hard Road to World Order‘, Gardner emphasised the objective of dismantling national sovereignty

In short, the ‘house of world order’ will have to be built from the bottom up rather than from the top down. It will look like a great ‘booming, buzzing confusion,’ to use William James’ famous description of reality, but an end run around national sovereignty, eroding it piece by piece, will accomplish much more than the old-fashioned frontal assault.

For the Trilateral Commission, the future is now. The new applicants of today may well become the leaders of tomorrow. This is ultimately how they have maintained their significance over the best part of half a century, by having the right people positioned in the right places.