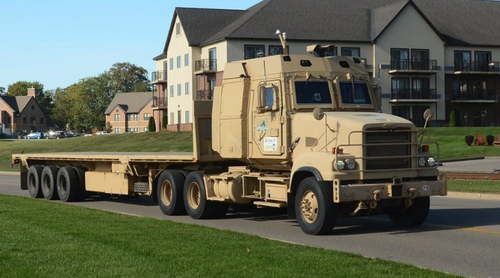 Robot trucks carrying drone swarms, robot soldiers, autonomous artillery, autonomous missiles; what could go wrong with this? Military Technocrats who insist that technology is the answer to all problems are turning the world into a technological kill zone. ⁃ TN Editor

The US Army has recently stated that two transportation battalions will receive a fleet of autonomous leader-follower vehicles by summer 2019. This is a developing theme in the service of ‘take the man out of the machine’ has led to a new era of autonomous systems entering the modern battlefield as the Pentagon prepares for the next series of conflicts.

“The Ground Vehicle Systems Center’s work with the Robotic Operating System – Military (ROS-M) covers a spectrum of autonomy and robotics, including small explosive ordnance disposal-assist robots that have been fielded as part of the advanced leader-follower capabilities that Soldiers in two transportation battalions will see by summer 2019,” said an article published in the January – March 2019 issue of Army AL&T magazine.

According to the Defence Blog, the ROS-M “uses an open-source approach and a widely accepted software framework with common government and industry software to develop military robotics and autonomous systems. The open-source approach allows developers to create software modules for different applications and enables integrators to build modular systems using the best software modules available for military autonomous systems.”

During the Afghan war, the Army consumed around 45 million gallons of fuel per month; the human cost was one death or injury for every 24 fuel convoys brought in.

Pentagon figures show in 2013 alone, about 60% of US combat causalities were related to convoy resupply.

In the post IED era, removing the human element from the supply chain has been a significant focus for the Army and the primary driver for developing new autonomous systems.

Robotic vehicles can help the Army in multiple ways: “It eliminates the need for Soldiers to conduct mundane, dangerous or repetitive tasks that can be automated, and it increases the standoff distance between Soldiers and a threat, which can greatly enhance safety. Additionally, automation can increase logistics on convoy missions,” said the Defense Blog.

For example, two soldiers can operate an entire convoy that usually requires dozens of soldiers or about two per vehicle. This frees up soldiers to conduct other missions, and or tasks that involve defending the caravan from enemy forces.