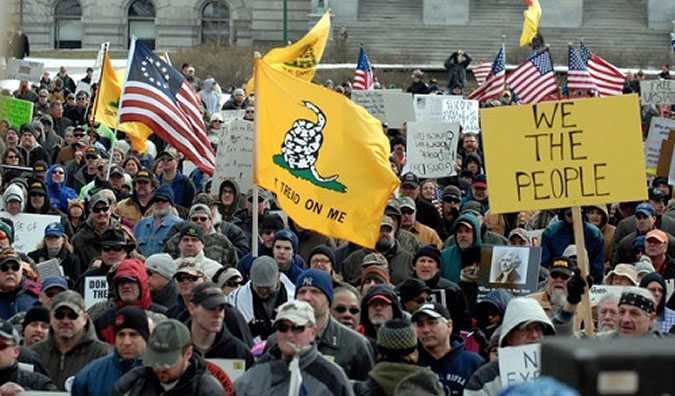 TN Note: Technocracy defends itself by turning the government against anti-government protestors in an unprecedented move. Citizens convicted of supporting domestic groups placed on the “domestic terror” list could draw a penalty of up to 20 years in federal prison. This obviates the Constitution’s protection of free speech and the right to dissent. What kind of groups could potentially be classified as terrorist? Pro-gun lobbies, local and state militias, anti-BLM/land rights groups, etc. Your legislators must be warned to spurn any legislation that plays into this meme.

The U.S. Justice Department is considering legal changes to combat what it sees as a rising threat from domestic anti-government extremists, senior officials told Reuters, even as it steps up efforts to stop Islamic State-inspired attacks at home.

Extremist groups motivated by a range of U.S.-born philosophies present a “clear and present danger,” John Carlin, the Justice Department’s chief of national security, told Reuters in an interview. “Based on recent reports and the cases we are seeing, it seems like we’re in a heightened environment.”

Over the past year, the Justice Department has brought charges against domestic extremist suspects accused of attempting to bomb U.S. military bases, kill police officers and fire bomb a school and other buildings in a predominantly Muslim town in New York state.

Carlin and other Justice Department officials declined to say if they would ask Congress for a comparable domestic extremist statute, or comment on what other changes they might pursue to toughen the fight against anti-government extremists.

The U.S. State Department designates international terrorist organizations to which it is illegal to provide “material support.” No domestic groups have that designation, helping to create a disparity in charges faced by international extremist suspects compared to domestic ones.

A Reuters analysis of more than 100 federal cases found that domestic terrorism suspects collectively have faced less severe charges than those accused of acting on behalf of Islamic State since prosecutors began targeting that group in early 2014.

The brave patriots that occupied the wild-life refuge in Oregon are now being
charged for “terrorism.” Look-out tea-party, NRA, or any group that expresses
our constitutional rights. It’s official–we are “terrorist.”

It is not “anti-government” protesters, our government is the US Constitution. It is anti corrupt governmental officials at all levels, including those that break the lawfully required Oath they are under, that need to be replaced with lawful, constitutional ones. Since our elections are all fraudulent, we are left with charging them with the crimes they have committed, up to and including Treason and *Terrorism against the American people, plus Oathbreaking – felony and the crime of Perjury, and breaking the contract(s) (US & state Constitution(s)) that they are under. They are the criminals, what they are ALLOWED to do… Read more »

Seems to me these shameful, corrupt pliticans are getting a little worried. After years of messing with an Americans civil rights and other dirty deeds they getting a little scared that we’ve had enough of their BS !! Now they want mORE laws to protect their collective a$$’s. Oh yea let’s protect the mu-slimes too !!

So includes SPCA and local Police and Boy Scouts and Civil Air patrol and Big Brothers and Sisters, Safe Houses etc. nothing but Nazification indictment of US Citizenry. Fed Government Indictment od s ALL

Pursuant to the Act of 1871, the Emergency War Powers Act, Trading With the Enemy Act, that all tied together with The Federal Reserve Act, The Independent Treasury Act, The Geneva Convention of 1938, The Emergency Banking Relief Act, etc., ‘We The People’ have been classified since 1933, as: ‘Enemies-of-the-Corporate-State’, or THE UNITED STATES OF AMERICA INCORPORATED, aka USA Inc., a private foreign owned off-shore international criminal banking/military cartel ‘masquerading’ as our sovereign Constitutional governing body, domiciled in yet another de facto and completely fraudulent corporate-state: WASHINGTON DISTRICT OF COLUMBIA INCORPORATED/VIRGINIA TRUST HOLDING COMPANY circa 1604-1933. All states, counties, cities… Read more »