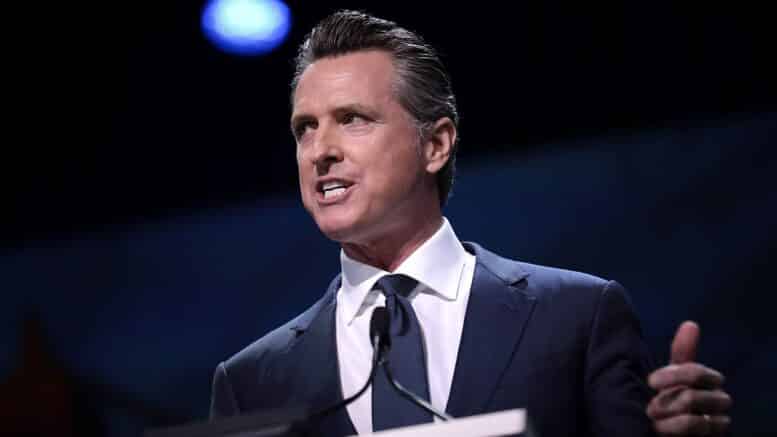 California Governor Gavin Newsom chooses to ignore the Supreme Court ruling on lifting restrictions against churches and synagogues. This is a natural outcome of the antipathy between progressivism and Biblical thought that has existed for well over 100 years. ⁃ TN Editor

The United States Supreme Court rebuked Democrat New York Gov. Andrew Cuomo for lockdowns imposed on houses of worship, but Democrat California Gov. Gavin Newsom is ignoring the high court’s lifting of restrictions in New York and is doubling down on his coronavirus lockdowns on religious gatherings.

Newsom has informed the court that his actions are justified by the increase in virus cases and the “perils” of indoor gatherings where people sing or chant.

“California is experiencing an unprecedented surge in COVID-19 cases, creating an even greater public health need for restrictions on prolonged communal gatherings in indoor places,” California Attorney General Xavier Becerra’s office said in a filing opposing a church group’s request for restrictions to be lifted.

“Scientific evidence demonstrates why those activities pose a particularly grave threat of virus transmission during the current pandemic,” the state’s lawyers said.

Newsom has not cracked down on other gatherings, including sports events, protests, or even Hollywood movie productions.

The San Francisco Chronicle reported on the restrictions that seem to target churches and other places of worship:

The court rejected a San Diego County church’s challenge in May to Newsom’s orders limiting indoor worship services to 25% of the building’s capacity, with a maximum attendance of 100. Chief Justice John Roberts cast the deciding vote in the 5-4 ruling, saying the state was treating churches the same as secular businesses and should be allowed to make its own health care decisions.

Anticipating the ruling, California churches had already asked the Supreme Court to step into their cases, now in lower courts, and strike down Newsom’s current restrictions. For counties in high-risk areas, which covers most of the state, the governor is forbidding all indoor worship services because of the rise in COVID cases, while allowing 25 percent indoor attendance in moderate-risk counties.

The request for immediate court intervention was filed by Harvest Rock Church of Pasadena and Harvest International Ministry, which is affiliated with 162 California churches. And Salvatore Cordileone, the Catholic archbishop in San Francisco, said Saturday he may also challenge Newsom’s order in court.

So we dont wrestle against flesh and blood, but it sure looks that way sometimes