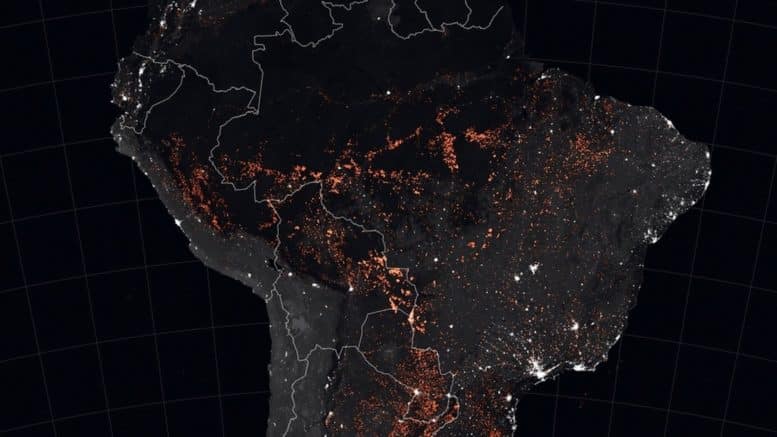 Please Share This Story!
PDF 📄
Green Fascist radicals have the ears and pages of mainstream media like the New York Times to openly demonize a duly elected President of a sovereign nation in order to bully, intimidate, slander and generally promote their insane causes. This is the epitome of the worst sort of hate speech and fake news but is of no concern to major media outlets.

Ecocide is defined as:

“the extensive destruction, damage to or loss of ecosystem(s) of a given territory, whether by human agency or other causes, to such an extent that peaceful enjoyment by the inhabitants of that territory has been severely diminished.”

Americans (and Brazilians) need to understand that these forces of Green Fascism, aka Technocracy, will not be silenced until they are completely rejected by citizens everywhere. If these control-freaks were ever to rise to power, their jackboot would stamp out freedom and liberty everywhere.

Since August, as vast stretches of the Amazon rainforest were being reduced to ashes and outrage and calls for action intensified, a group of lawyers and activists who have been advancing a radical idea have seen a silver lining in the unfolding tragedy: One day, a few years from now, they imagined Brazil’s president, Jair Bolsonaro, being hauled to The Hague to stand trial for ecocide, a term broadly understood to mean the willful and widespread destruction of the environment, and one that, they hope, will eventually be on par with other crimes against humanity.

There is no international crime today that can be used to neatly hold world leaders or corporate chief executives criminally responsible in peacetime for ecological catastrophes that result in the type of mass displacements and population wipeouts more commonly associated with war crimes. But environmentalists say the world should treat ecocide as a crime against humanity — like genocide — now that the imminent and long-term threats posed by a warming planet are coming into sharper focus.

In Mr. Bolsonaro they have come to see something of an ideal villain tailor-made for a legal test case.

“He has become a poster boy for the need for a crime of ecocide,” said Jojo Mehta, the co-founder of Stop Ecocide, a group that is seeking to give the International Criminal Court in The Hague the jurisdiction to prosecute leaders and businesses that knowingly cause widespread environmental damage. “It’s awful, but at the same time it’s timely.”

The first prominent call to outlaw ecocide was made in 1972 by Prime Minister Olof Palme of Sweden, who hosted the United Nations’ first major summit on the environment.

In his keynote address at the conference, Mr. Palme argued that the world urgently needed a unified approach to safeguard the environment. “The air we breathe is not the property of any one nation, we share it,” he said. “The big oceans are not divided by national frontiers; they are our common property.” That idea got little traction at the time and Mr. Palme died in 1986 having made little headway in the quest to establish binding principles to protect the environment.

During the 1980s and 1990s, diplomats considered including ecocide as a grave crime as they debated the authorities of the International Criminal Court, which was primarily established to prosecute war crimes. But when the court’s founding document, known as the Rome Statute, went into force in 2002, language that would have criminalized large-scale environmental destruction had been stripped out at the insistence of major oil producing nations.

In 2016, the court’s top prosecutor signaled an interest in prioritizing cases within its jurisdiction that featured the “destruction of the environment, the illegal exploitation of natural resources or the illegal dispossession of land.”

That move came as activists seeking to criminalize ecocide had been laying the groundwork for a landmark change to the court’s remit. Their plan is to get a state that is party to the Rome Statute — or a coalition of them — to propose an amendment to its charter establishing ecocide as a crime against peace. At least two-thirds of the countries that are signatories to the Rome Statute would have to back the initiative to outlaw ecocide for the court to get an expanded mandate, and even then it would only apply to countries that accept the amendment. Still, it could change the way the world thinks about environmental destruction.

Richard Rogers, a lawyer who specializes in international criminal law and human rights, said that if ecocide campaigners and countries suffering the effects of climate change put forward a narrow definition of the crime, it could quickly garner widespread support. “We’ve seen in the past few years a huge shift in public opinion, and we’re entering a phase where there is going to be huge pressure on governments to do more,” said Mr. Rogers, a partner at Global Diligence, a firm that advises companies and governments on risk mitigation.

Given the number of countries and businesses that would recoil at the prospect of being held criminally responsible for environmental damage, he said, it is vital to come up with criteria that reserve prosecution for cases in which “massive and systematic” environmental destruction is done “knowingly or intentionally.”

Environmental activists say there is no shortage of culprits who could be put on trial if the world were to decide to outlaw ecocide. But few are as compelling as Mr. Bolsonaro, a far-right former Army captain who campaigned on a promise to roll back the land rights of indigenous people and open protected areas of the Amazon to mining, farming and logging.

From an evidentiary standpoint, Mr. Bolsonaro is an attractive potential defendant because he has been so starkly disdainful of his own country’s environmental laws and regulations. He vowed to put an end to fines issued by the agency that enforces environmental laws. He has asserted that protecting the environment matters only to vegans. He complains that Brazil’s 1988 Constitution set aside too much land to indigenous communities who “don’t speak our language.”

Since Mr. Bolsonaro took office in January, deforestation in the Amazon has increased significantly, setting the stage for the thousands of fires that began raging last month. Government agencies tasked with protecting the environment warn meanwhile that they are at a breaking point as a result of budget and personnel cuts.

Mr. Bolsonaro is by no means the only world leader reviled by environmentalists. President Trump has been assailed for rolling back environmental regulations and pulling out of the Paris climate accord.

Facing a cascade of international pressure and a boycott of some Brazilian exports, Mr. Bolsonaro last month ordered a military operation to put out fires in the Amazon. But the government’s overriding message has been that the world’s angst about the Amazon is an unwelcome and unwarranted intrusion on Brazil’s sovereignty.