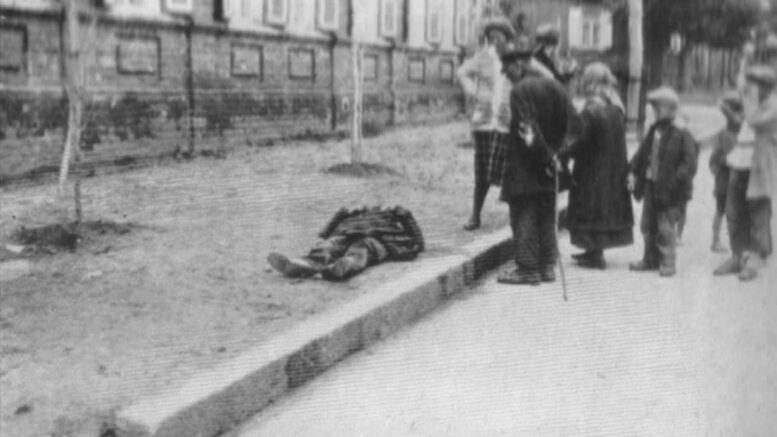 he corpses in the streets of the Charkov at the beginning arouse the sympathy of the famished. | https://www.garethjones.org/soviet_articles/thomas_walker/muss_russland_hungern.htm

Please Share This Story!
PDF 📄
Holodomor means “death by hunger” in Ukrainian, and Americans would do well to revisit the details of that horrible Ukraine genocide where up to 7 million rural farmers and peasants died after their means to grow food was intentionally removed from them. ⁃ TN Editor

CF Industries, the nation’s largest manufacturer of fertilizers, is warning its customers that fertilizer shipments will be delayed and may not reach farmers in time for the critical spring planting season because of a move by Union Pacific Railroad to limit the volume on private boxcars carried by its rail lines.

The railroad company ordered CF Industries and 29 other shippers cut their volume by 20 percent. Union Pacific says the reductions are needed to reduce congestion, but CF Industries said it would ask federal regulators to intervene and end the railroad restrictions.

Why Union Pacific would single out the nation’s largest fertilizer producer just as it is trying to get its product to farmers in time for spring planting is suspicious, to say the least.

Mike Adams is reporting that rail carriers are also partially halting transportation of livestock feed grain, potentially forcing farmers to slaughter their cows and chickens if they can’t get enough grain to feed them. This would further drive up prices of dairy products such as milk, eggs, yogurt, etc.

The railroad-mandated shipping reductions not only means shipping delays for farmers but CF Industries said it would be unable to accept new orders involving Union Pacific rail transportation for the foreseeable future.

CF Industries announced its dire predicament April 14 on its website. This disruption in the delivery of fertilizers comes at a time of steadily escalating food prices at grocery stores nationwide due to supply chain disruptions, War between Russia and Ukraine, China hording global grain supplies, weather-related crop failures and other issues, all adding up to a perfect storm for global famine.

Unless American farmers produce a bumper crop this fall, the rampant food price inflation will continue to intensify, driving prices up even faster and leading to more shortages on the store shelves heading into late 2022 and 2023.

CF Industries ships to customers via Union Pacific rail lines primarily from its Donaldsonville Complex in Louisiana and its Port Neal Complex in Iowa. The rail lines serve key agricultural states in America’s heartland, including Iowa, Illinois, Kansas, Nebraska and Texas, as well as California.

Products that will be affected include nitrogen fertilizers such as urea and urea ammonium nitrate (UAN) as well as diesel exhaust fluid (DEF), an emissions control product required for diesel trucks.

Tony Will, president and chief executive of CF Industries, summed up the direness of the situation in a press release reproduced below:

“The timing of this action by Union Pacific could not come at a worse time for farmers. Not only will fertilizer be delayed by these shipping restrictions, but additional fertilizer needed to complete spring applications may be unable to reach farmers at all. By placing this arbitrary restriction on just a handful of shippers, Union Pacific is jeopardizing farmers’ harvests and increasing the cost of food for consumers.

“On Friday, April 8, Union Pacific informed CF Industries without advance notice that it was mandating certain shippers to reduce the volume of private cars on its railroad effective immediately. The Company was told to reduce its shipments by nearly 20 percent.

“CF Industries believes it will still be able to fulfill delivery of product already contracted for rail shipment to Union Pacific destinations, albeit with likely delays. However, because Union Pacific has told the company that noncompliance will result in the embargo of its facilities by the railroad, CF Industries may not have available shipping capacity to take new rail orders involving Union Pacific rail lines to meet late season demand for fertilizer.”

The application of nitrogen fertilizer is critical to maximizing crop yields. If farmers are unable to secure all the nitrogen fertilizer that they require in the current season because of supply chain disruptions such as rail shipping restrictions, the Company expects yield will be lower. This will likely extend the timeline to replenish global grains stocks. Low global grains stocks continue to support high front month and forward prices for nitrogen-consuming crops, which has contributed to higher food prices.

CF Industries intends to engage directly with the federal government to ask that fertilizer shipments be prioritized so that spring planting is not adversely impacted.

“CF Industries’ North American manufacturing network continues to produce at a high rate to meet the needs of customers, farmers and consumers,” said Will. “We urge the federal government to take action to remove these Union Pacific rail shipment restrictions to ensure this vital fertilizer will be able to reach U.S. farmers when and where they need it.”

Mr. Wood, this is definitely part of the Great Reset. I did some checking. Union Pacific Railroad is owned by Union Pacific Corporation. Guess who owns a controlling interest in Union Pacific Corporation; Blackrock. As you are no doubt aware, the CEO of Blackrock is Larry Fink, one of the world’s richest and most powerful technocrats. And, just as the COVID scam-demic was a planned event, so are the coming food shortages, and even the collapse of Ukraine (the original websites are gone, so I’ve provided links to archived copies). Everything that is happening now was wargamed by the perpetrators… Read more »

Interesting info, This is one more incident proving God has slammed shut and welded shut the door on this country (and others) while praying for friends and family to endure. We have been conquered by the globalist/central banks cartel pushing for the reset full throttle. Everything is broken and no politician being corrupt and/or compromised can fix anything.

Are Railroads Colluding To Curtail Food Production? - All View News

So who is behind this? Someone has to have instigated this obvious attempt to starve the American people and destroy farmers and food sources. This didn’t just come up out of thin air after all these years of the railroad doing the same shipping job for years. Our fake government has to be behind it or they could stop it from happening.