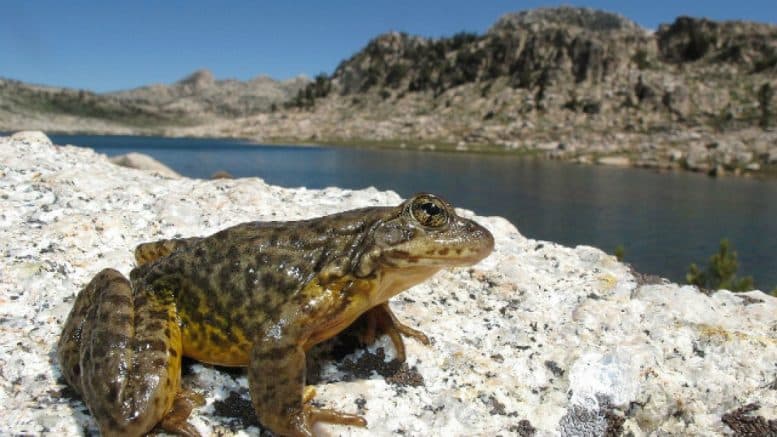 Please Share This Story!
PDF 📄
This is an example of Reflexive Law being applied, which I explained in Chapter 7 of Technocracy Rising: The Trojan Horse of Global Transformation. This whole twisted mess started when the radical Center for Biological Diversity (based in Tucson, Arizona) sued the state of California for alleged abuses that endangered a native frog, that required the U.S. Fish & Wildlife to intervene and sequester huge tracks of land. In the meantime, the ranchers are being forced to comply with regulations that they had no part in creating in the first place. ⁃ TN Editor

Tiny frogs and toads used to swarm over the Sierra Nevada. Now, the government says nearly 2 million acres of land needs to be preserved to prevent them from going extinct.

California ranchers and logging groups say those protections are hurting their ability to make a living. So another conflict over the Endangered Species Act is going to court.

The California Farm Bureau and two ranchers’ associations sued the U.S. Fish and Wildlife Service on Monday, challenging a year-old decision to designate more than 1.8 million acres of rural California as “critical habitat” for three species of frogs and toads that are protected by the Endangered Species Act.

Loggers and ranchers who harvest timber or graze cattle on public lands worry the new restrictions on land use will eventually make it more difficult – if not impossible – to make a living in the Sierra, said Shaun Crook, a Tuolumne County cattle rancher whose family also owns a logging company.

“It has the economic impact of putting you out of business is what that reality could be,” said Crook, president of the Tuolumne County Farm Bureau.

Even though the designation was made a year ago, Crook said federal officials haven’t yet told him how the protections will affect his cattle, which graze on federal lands. But he said he and other ranchers worry that major tracts of land will be put off limits or they’ll be required to install fencing around protected areas.

The case affects a wide swath of the Sierra Nevada region, from Lassen to Inyo counties. It includes portions of Placer and El Dorado counties. Most of the land is owned by the government and is in designated wilderness areas, where the “highest level of conservation protection” on federal land is required, according to the Fish and Wildlife Service.

The critical habitat designation subjects farmers “to substantial regulatory burdens that impose, among other things, study costs, risk assessments, mitigation fees, operational changes, permit fees, and consulting expenses,” said the lawsuit, filed in U.S. District Court in Washington, D.C. “In some cases, these burdens put the rancher’s livelihood at risk.” The farm groups are represented by the Pacific Legal Foundation, a Sacramento nonprofit that fights for conservative and property-rights causes.

Both yellow-legged frogs were listed as “endangered ” while the Yosemite toad was listed as “threatened” in 2014 under the Endangered Species Act. Designation of critical habitat is typically the final step in the process of officially listing an animal as endangered.

This is all part of the UN Agenda 21plan to make us part of a Communist one world gov., I remember reading the document & one line says “it isn’t equitable for some to buy & sell property & make a profit when not everyone can afford to” & we know communism owns all the lands. This agenda excuse is global cooling/global warming/climate change, (they have had to change the excuse because weather always changes)