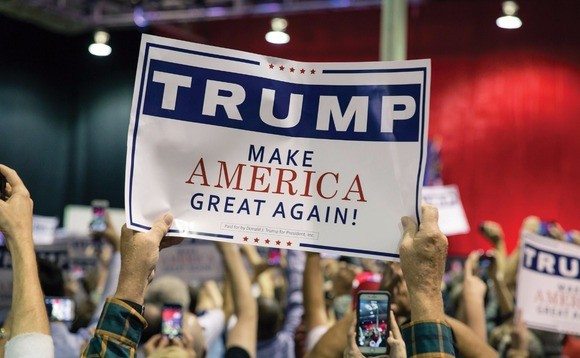 TN Note: Figueres is current head of Climate Change at the United Nations, although she will be stepping-down from that post in July. She is likely correct that certain global-minded business interests in the U.S. will fight Trump tooth-and-nail if he attempts to keep his promise to dump the Paris climate-change accord.

Republican Presidential nominee Donald Trump’s threats that he would ‘cancel’ the Paris Agreement may have sparked concern among environmentalists worldwide, but it seems Christiana Figueres, the UN’s chief climate change diplomat, is not overly worried by the real estate mogul’s threats.

In one of her final interviews as head of the UN Secretariat on climate change before she steps down from her post in July, Figueres told BusinessGreen US business leaders would oppose any attempt by Trump to pull the US out of the Paris Agreement, because the low carbon economy represents such an important business opportunity.

“I just don’t think that US business would allow that, because US business has seen that this is actually a very, very interesting opportunity for US technologies and US skills, technical and otherwise, to be invested in and to be used around the world,” she said. “And there is so much to be gained here by the United States but also by other countries, that it would shoot US business in the foot to remove itself from a process that is now an unstoppable global process.”

The comments come in response to the Republican nominee’s first major speech on energy policy late last month, when he pledged to cancel the Paris Agreement and stop all payments of US public money to the UN climate fund.

But Figueres said that while a Trump presidency could “unilaterally remove itself from the Paris Agreement”, she was sceptical it would happen, in part because of the likely business response and in part because such a move would have “a huge detrimental effect on the political standing of the United States internationally”.

During the wide-ranging interview, Figueres stressed the need for urgent action on the ground to create policy environments where low-carbon businesses can thrive. She also praised firms which are taking steps to transform their business models – highlighting the work of Saudi oil major Aramco and French oil giant Total as two carbon intensive energy incumbents pivoting towards a low-carbon model.

The news comes as President Obama ramps up his efforts to ensure the Paris Agreement enters into force before he leaves office in January 2017. Last week following a meeting with Indian Prime Minister Narendra Modi, where climate action was high on the agenda, Obama reaffirmed the US’s commitment to ratifying the Paris Agreement as soon as possible this year. Meanwhile,Modi revealed India also plans to ratify the deal by the end of the year – the first time it has set out a timeline for ratification.

In order to come into force, the Paris Agreement must be ratified by at least 55 countries, representing at least 55 per cent of global emissions.