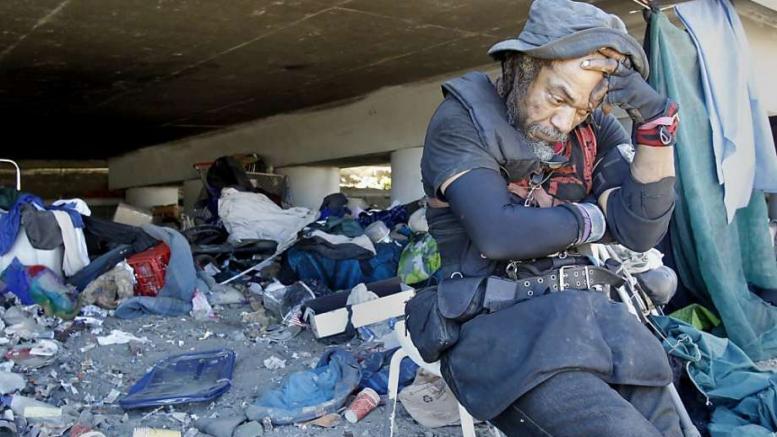 Please Share This Story!
PDF 📄
Technocrats care about inventing, not improving life for fellow citizens. San Francisco is dominated by tech giants but is in a state of dystopian anarchy by homeless, addicts, and criminals.

If they chose to have a normal role in society,  billionaire entrepreneurs like Jack Dorsey (Twitter),  Dara Khosrowshahi (Uber), Brian Chesky (Airbnb), and Marc Benioff (Salesforce), could have a huge impact in returning the City to human livability. ⁃ TN Editor

Gilles Desaulniers moved to San Francisco 40 years ago, settling in the ‘friendly, quaint and affordable’ city after running out of cash while driving from Canada down the West Coast of America.

But Gilles has shut one outlet and would sell up entirely if anyone wanted this one, his remaining shop.

Each day, up to 30 people stroll in and openly steal goods, costing him hundreds of dollars.

He has been bitten twice recently by people in his shop and he also found a woman turning blue in the toilet after a drugs overdose, a hypodermic needle still stuck in her leg.

He showed me a metal door that is corroding due to people urinating in his doorway, then spoke of finding a man relieving himself in full view of infants playing in a child centre next door.

‘If people do not play by some rules, society does not function. But it feels like there is no order, there is no shame.’

He uses two apocalyptic movies to illustrate the state of his adopted city: ‘Living here feels like A Clockwork Orange and Blade Runner have both come true.’

I could grasp his despair. I had just passed dealers selling drugs beside a police car parked outside government offices, and seen their customers openly smoke fentanyl, an opioid 50 times stronger than heroin, then collapse on the street.

All cities have their seedy sides. But this is the very centre of San Francisco, by an upmarket Westfield shopping mall thronged with people in designer clothes perusing Rolex watches, Louis Vuitton handbags and Tiffany jewellery.

The beautiful city by the bay, where Tony Bennett famously left his heart and which poses as a beacon of progressiveness, has more billionaires per capita than any other on the planet.

Not long ago, a seven-bedroom home here recently sold for $38 million (£29 million), while at the Michelin-starred Saison restaurant, the ‘kitchen menu’ starts at $298 a head and reservations require a $148 deposit.

The city authorities have a huge $12 billion budget, handing their 31,800 staff average annual pay and benefit packages of an astonishing $175,000.

Yet the tide of homeless, addicted and mentally ill people washing up here has become so severe that a global expert on slums claimed San Francisco may be more unsanitary than some of the poorest parts of Africa and Asia.

Oracle, one of the technology giants based in the nearby Silicon Valley, has switched a conference for 60,000 people to Las Vegas due to the toxic combination of ‘poor street conditions’ and costly hotels.

This followed a medical association moving its $40 million convention out of San Francisco amid safety fears because of sordid tent encampments and overt drug use. Other events are being affected.

‘Indoors, people are making deals, talking about healthcare and networking. Yet in the streets, I witnessed homeless people injecting cocaine,’ tweeted Kistein Monkhouse while attending a recent J. P. Morgan conference for 9,000 people.

As one prominent academic tells me, it seems a cruel irony that so much squalor and despair is found in the Californian base of all those billionaire technology titans seeking to reshape the world in their image.

‘San Francisco has always had hobos but we’ve never seen anything like this. It’s become a vision of some kind of strange dystopian future,’ says Joel Kotkin, a widely respected professor in urban studies.

He can reel off damning statistics to back his claim that San Francisco symbolises the Golden State’s descent into ‘high-tech feudalism’ including America’s highest poverty levels, its worst rates of property crime and its biggest gap between top and middle incomes.

But one statistic stands out: almost half of homeless people in the United States are in California, according to a recent White House study.

And San Francisco, a comparatively small city that is home to tech giants such as Twitter, Uber and Airbnb, has the highest rate of ‘unsheltered’ citizens – at ten times the national level.

You get what you voted for. Vote communism, you gets dystopian. Idiots.

justsayin
Reply to  communism are morons

Seems you don’t even have to vote for communism to get communism. This website shows this in all it’s glory. Tyrant’s are in control of the world. “Then Jesus was led up of the Spirit into the wilderness to be tempted of the devil. And when he had fasted forty days and forty nights, he was afterward an hungered.” Matt. 4:1&2 As we read on there are 3 temptations, hunger satisfied through making stones into bread, temptation by Satan to prove Jesus is God by throwing Himself down and the angels would catch Him, but the last one is interesting,… Read more »

We have so many taxes, regulatory fees, fines, penalties and redistribution of wealth schemes at the various levels of government, nobody can even name them all. It’s why the Citizens forced the politicians to enact a bill of rights to stop them from taxing us and thus it would also restrain the size and scope of powers of government. Now money, no power. Of course, the evil bastards just ignored and trampled our property rights with voluminous amounts of taxes, were today there are some 100 million people living at or near the poverty line and 53% of all workers… Read more »

California has run out of 1%-er conservatives to blame for everything, so now the liberals have to start eating their own 1%-ers.