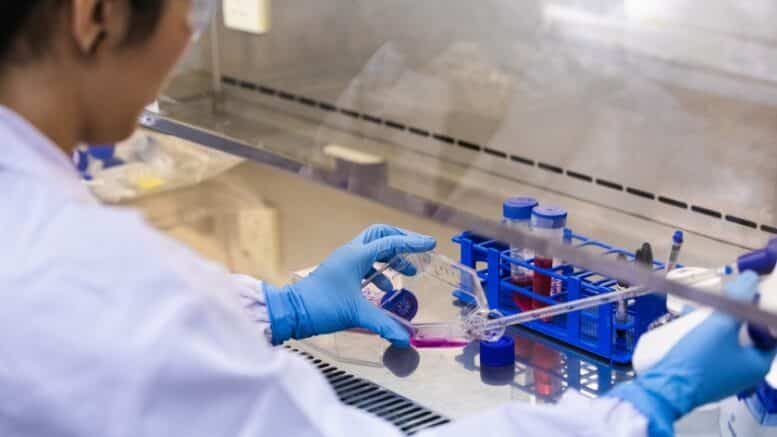 Please Share This Story!
PDF 📄
Beef, pork, chicken, fish and now shrimp will be cultivated in a lab along with genetic manipulation. Add to that dairy, corn, soybeans, rice, canola, etc. For Technocrats, nature isn’t good enough and needs their help in providing better food for the human race. Side effects are unknown, testing is scant and data is protected like the gold in Fort Knox. ⁃ TN Editor

In an industrial corner of Singapore, multiplying steadily in bioreactors heated precisely to 82 degrees, real shrimp meat is being grown from samples of the crustacean’s microscopic cells.

Fed a nutrient-rich soup meant to mimic its diet in the wild, a single cell can reproduce over a trillion times into a mound of gray translucent flesh. Think of it as meat growing without all the other parts of the animal, including that chalky black vein.

The venture is being led by Sandhya Sriram and a team of scientists, who are attempting to upend one of the cornerstones of dim sum. Sriram’s company, Shiok Meats, is named after Singaporean slang used to declare something delicious.

Similar work is being done across the world at other startups and research labs to grow beef, pork, chicken and high-end specialty products such as bluefin tuna and foie gras, but Sriram’s company is the only one known to be focused on re-creating shrimp, a staple in many Asian dishes.

Shiok’s finished product — this reporter was unable to try it because no outsiders are allowed to visit its headquarters during the pandemic — possesses the texture of ground shrimp and has already been tested to make shumai, the Cantonese dim sum mainstay with the yellow dumpling wrapper. But its applications are potentially manifold in Chinese-centric cuisine.

You could layer a dollop of it over a raft of tofu, steam it and douse it with a slightly sweeter soy sauce. It could be squeezed out of a piping bag into a simmering hot pot broth. And it might be the kind of thing you’d want to roll into balls, bread and deep-fry.

Eventually Sriram, who cofounded the company two years ago, would like to move beyond ground shrimp meat to produce crab, lobster and a structured deshelled shrimp, one convincing enough to hang off the edge of a glass filled with cocktail sauce.

Singapore has emerged as a leading player in the budding technology once derided as “Frankenmeat” after Dutch researcher Mark Post unveiled the first “test-tube burger” to a panel of food critics at a news conference in London seven years ago.

Researchers have been able to drive down the price of the meat, which is called cell cultured meat or clean meat, from the nearly $300,000 it cost to produce Post’s debut patty — though not enough to actually sell it to the public yet. Shiok’s shumai, for example, cost $300 apiece.

In what’s been described as an “edible space race,” at least 55 companies worldwide are now involved in developing some variety of cell cultured meat, according to the Good Food Institute, a Washington-based nonprofit advocating alternatives to animal agriculture.

That includes one in Hong Kong that re-creates fish maw or bladder, a delicacy often used in soups; an Australian startup that’s growing kangaroo meat; and a company in China that’s looking to re-create pork in a country where rising demand for meat will test the limits of the world’s supply. Last year, an Israeli startup successfully grew cow muscle tissue on the International Space Station.

The science’s emergence has provoked existential questions about the provenance of meat, prompting vegans to contemplate whether the technology represents a sort of loophole if it doesn’t harm animals, and Jewish and Muslim religious leaders to ponder if the lab-grown pork could be deemed kosher or halal.

Eventually, the technology could allow for novel kinds of meat to be made, presenting chefs with unusual possibilities.

“Imagine when you can tailor the taste of any piece of meat,” said Ryan Bethencourt, the San Francisco-based cofounder of biotech accelerator IndieBio, who provided Shiok with its initial seed funding. “What does pork with salmon fat taste like? What does a mix between Wagyu beef and other heritage beef steak lines taste like? What about meat that tastes both sweet and sour?”

Soon we will have two choices: Eat their “Frankenfood” or learn to grow our own food.