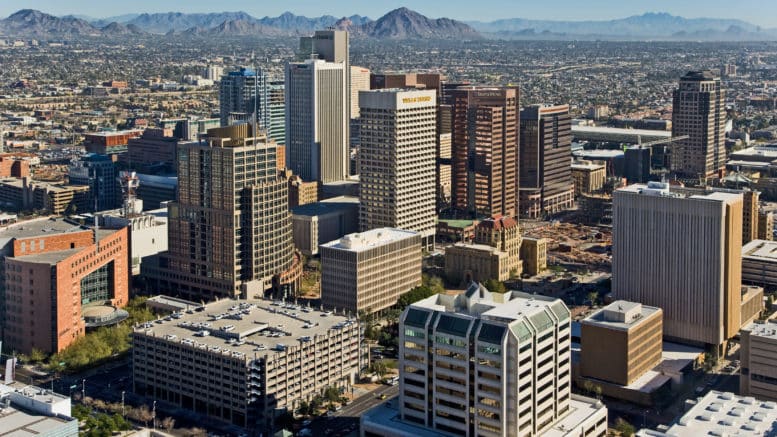 Please Share This Story!
PDF 📄
Arizona State University brags about being the leading Sustainable Development center in America, and is now taking a key role to promote regionalism and Smart City initiatives in Arizona. It will be a massive Public-Private Partnership. A key partner, Arizona Institute for Digital Progress, claims that this is America’s first Smart Region.  ⁃ TN Editor

A new initiative to grow smart city projects is taking hold in the Phoenix metro region.

Maricopa County — home to Phoenix and more than 22 cities and towns — is between the third and fourth most populous county in the United States and one of the fastest growing in the country, and is also home to a number of technology companies and other businesses. The county is also home to the nation’s largest public research institution at Arizona State University (ASU).

“The Greater Phoenix Smart Region Initiative is being formed to build a system and framework that takes the approach of the smartest cities, and leverages the scale and testing capabilities of our entire region,” said Dominic Papa, executive director for the Institute for Digital Progress, during a Sept. 19 Meeting of the Minds webinar. “Both community- and industry-driven [research and development] are at the center of our smart region business model.”

ASU will serve the research and testbed role for the Phoenix Smart Region Initiative, harnessing the university’s considerable intellectual talent, particularly via the ASU Center for Smart Cities and Regions (CSCR).

“CSCR will provide the fundamental research piece to the collaboration. This will occur through a number of means and mechanisms, enabling CSCR to not only utilize the in-house expertise, but also those around ASU,” said Diana Bowman, director of CSCR and an associate professor with the Sandra Day O’Connor College of Law.

ASU and IDP will craft a “smart cities digital road map,” which should be complete by the end of October. “Through the road map, a set of regionwide key priorities will be developed to encompass some of the most pressing issues that we’re facing,” Papa said.

The collaboration brings the work of ASU out into the larger region and strengthens relationships among policymakers, entrepreneurs and others dedicated to growing innovation in the region.

The region’s biggest challenge lies in its inability to “clearly elucidate our collective challenges, identify our strategic opportunities, and build consensus on key priorities for the region,” Papa said.

The Arizona Institute for Digital Progress, a nonprofit established as the implementation partner for the Phoenix Smart Region Initiative, looked to other similar public-private partnerships to grow smart city projects, like the Dallas Innovation Alliance in Texas, the Internet of Things (IoT) Consortium at the University of Southern California and the numerous Smart Kansas City initiatives in Missouri.

One of the structural pieces of the initiative is the formation of the Arizona Urban iLabs, described as a connected network of “innovation sandboxes” throughout the region. The Urban iLabs are intended to foster collaborations across professions and stakeholders. The innovation sandbox will create a “living lab environment” where solutions can be tested and scaled, as well as provide the member communities with IoT infrastructure, such as a place to test beacons and sensors.

Funding will come from public, city and industry membership, as well as funding from the university.

“So, it’s a three-way kind of pot, from public, from private and from the university,” Papa added.