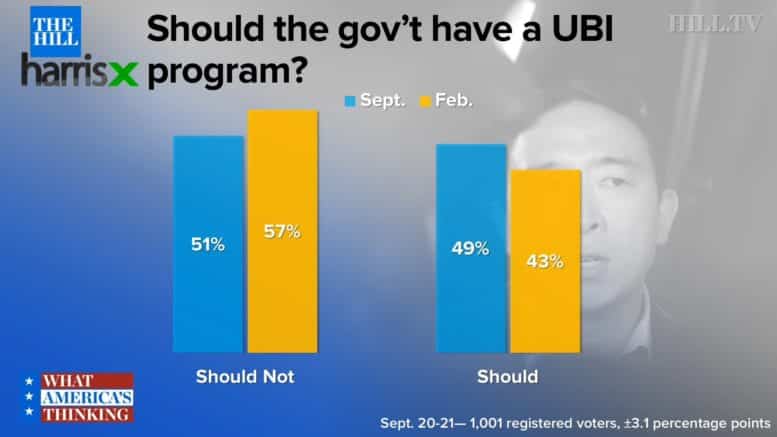 Please Share This Story!
PDF 📄
In a short eight month period, the approval figure went from 43% to 49%, a six point increase. Opposition likewise dropped six points. Only madness and total ignorance believes that there is a free lunch.

UBI is a direct descendant of 1930s Technocracy, which believed that everyone in society would receive a monthly stipend to cover living needs. ⁃ TN Editor

Support for universal basic income (UBI) is on the rise, according to a new Hill-HarrisX poll released on Wednesday.

The nationwide survey found that 49 percent of registered voters are in favor of a government-issued basic living stipend, which marks a 6-point spike compared to a similar survey in February.

Support for UBI remains particularly popular among young people. Seventy-two percent of those between the ages of 18 to 34 favor the idea.

But the proposal still isn’t as highly favored among older generations of Americans — only 26 percent of those 65 and older back a UBI program.

Democrats’ support for UBI increased from 54 percent to 66 percent, as did support among independents which ticked up to 48 percent.

Thirty percent of Republican respondents, meanwhile, said they would support a UBI plan.

Democratic presidential candidate Andrew Yang has centered his outsider campaign on a version of universal basic income, which pledges to give every American adult $1,000 a month.

The entrepreneur has touted the plan as a way to tackle the rising threat of automation.

During his opening remarks at the third Democratic debate, Yang debuted a pilot program for his universal basic income plan, calling on Americans to enter a giveaway to become one of 10 families to receive $1,000 a month for a year.

Though Yang said that his campaign received more than 500,000 entries for the contest, the plan has generated some criticism from his fellow contenders, including top-tier candidate Sen. Bernie Sanders (I-Vt.).

Sanders told Hill.TV last month that while there is “no question” that automation will have a fundamental impact on Americans, he argued that “people want to work,” and to “be a productive member of society.”

“…he argued that “people want to work,” and to “be a productive member of society.” NO Bernie. People want to be productive. They do not want to work, necessarily. Work implies a necessity to earn in order to feed oneself, buy energy from the criminal cartels and try to be safe in one’s home. So get your stuff straight. These concepts are not the same. They are exclusive. You are confabulating. AND, Yang? $1000 a month won’t even cover rent in a cheap city unless you live in a rat infested dump with the poorest of humans. Ask anyone on… Read more »

Most people DO NOT want to work. Where I live you would not believe how many people in this age group 18-60 sit at home getting fat every day~ seriously! Robots cannot no way take care of everybody. When all the “Workers are gone” they will see it plainly. You noticed they said “registered voters”? And they vote people! That’s truly scary. When they can vote themselves a free ride we are all doomed, and it’s happening already. “For even when we were with you, this we commanded you, that if any would not work, neither should he eat. For… Read more »

What about the bright young people who’s talents could go far, but their family doesn’t have money to continue their education? Their talents go wasted and they might end up stuck in a fast food job because the one thing stopping them from contributing to society was money. Now all those kids we used to call disadvantaged have the opportunity to further and dream big. Americans shouldn’t have to live paycheck to paycheck, fearful of not covering all their expenses. If people are able to cover their expenses they may have time to do amazing things. Think of the opportunities… Read more »