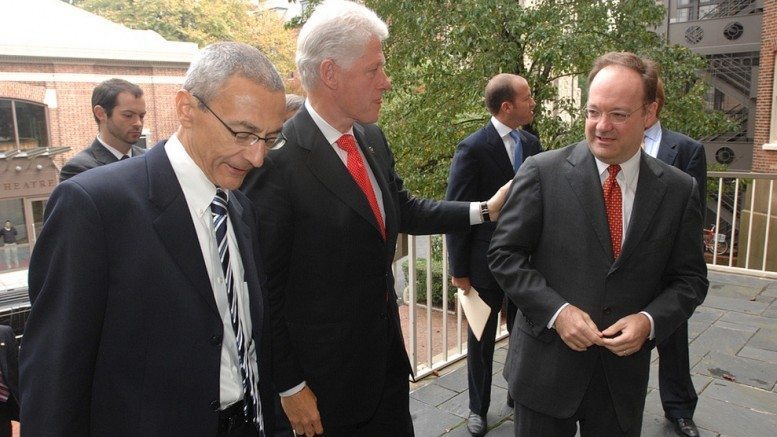 Please Share This Story!
PDF 📄
John Podesta is a member of the elitist Trilateral Commission and Hillary Clinton’s campaign manager. He and his organizations have long been on the dark site of progressivism. ⁃ TN Editor

The FBI and Justice Department have launched an investigation into whether the Podesta Group, the lobbying and public relations firm co-founded by Hillary Clinton presidential campaign chairman John Podesta, has any connections to alleged corruption that occurred in the administration of former President of Ukraine Viktor Yanukovych.

The federal probe is, CNN reports, “examining the work of other firms linked to the former Ukrainian government, including that of the Podesta Group.”

The Podesta Group, run by John Podesta’s brother Tony Podesta, was retained by the Russia-controlled firm UraniumOne in 2012, 2014, and 2015, to lobby Hillary Clinton’s State Department. The lobbying firm was paid a total of $180,000 according to public records.

Yanukovych took office in February 2010. He was forced to flee to Russian after a political uprising in Ukraine. Federal prosecutors are probing the work Yanukovych’s regime paid the Podesta Group to do while he was the head of the Ukrainian government.

As it was first detailed in the New York Times bestselling book Clinton Cash, Uranium One — which hired the Podesta Group — is the firm that funneled millions to the Clinton Foundation as the Russian government gained ownership of the company.

According to the New York Times, Russian President Vladimir Putin had a “goal of controlling much of the global uranium supply chain.”

As the Russians gradually assumed control of Uranium One in three separate transactions from 2009 to 2013, Canadian records show, a flow of cash made its way to the Clinton Foundation. Uranium One’s chairman used his family foundation to make four donations totaling $2.35 million. Those contributions were not publicly disclosed by the Clintons, despite an agreement Mrs. Clinton had struck with the Obama White House to publicly identify all donors. Other people with ties to the company made donations as well.

“And shortly after the Russians announced their intention to acquire a majority stake in Uranium One, Mr. Clinton received $500,000 for a Moscow speech from a Russian investment bank with links to the Kremlin that was promoting Uranium One stock,” the Times report said.

for the abuse of children alone, they should be removed and placed out by the Kuiper Belt with no return ticket.