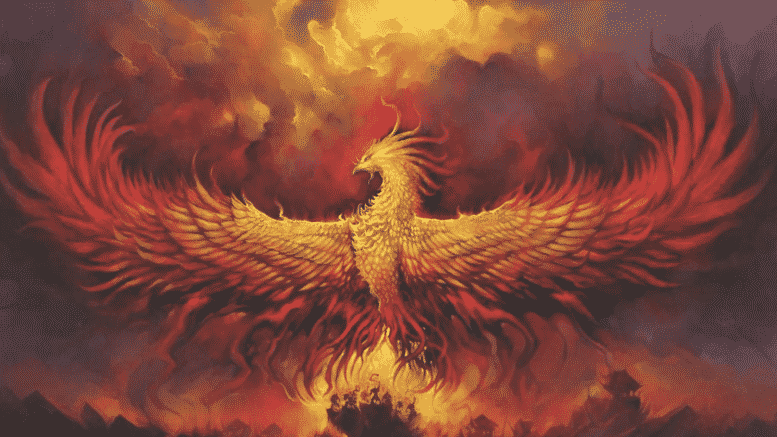 Phoenix rising out of the ashes

Please Share This Story!
PDF 📄
It is prevalent thinking that destructive economic policies are the result of bumbling politicians like Biden who “hasn’t got a clue that his ’empire is crumbling around him.” But in fact, the WEF Great Reset ideologues know exactly what they are doing to torch the existing global economy, making way for Technocracy. ⁃ TN Editor

“There is gonna be a new world order out there and we’ve gotta lead it!
And we gotta unite the rest of the world in doing it!”

That is what Biden proclaimed in a recent speech.

But since Biden has a tendency to get his speeches wrong, what he meant to say was:

“There is gonna be a new world DIS-order out there and we’ve gotta lead it!

Sadly, as the world has heard in many speeches by the US president, he hasn’t got a clue that his “empire” is collapsing around him.

But regrettably for Biden, the US isn’t an empire at all but a bankrupt nation without leadership. But even worse, the US has just in a final act of desperation not just shot itself in the foot but in the head.

Very few, if any, of today’s world leaders understand the consequences of their actions and clearly not Biden.

As the world is experiencing the end of an economic era, we are getting the leaders that we deserve and thus the appropriate ones to take the world to Armageddon.

So the world is now entering the final battle, a battle with totally incompetent heads of state which will lead to everyone losing.

The route to Armageddon will be disastrous for the world. Distressed leaders will take calamitous actions, exacerbating not only their own country’s problem, but also the rest of the world’s.

And that is exactly what we are seeing now with the worst possible concoction of debt deficits, currency debasement and decadence. The consequences were of course always predictable based on history. But no leader in the current era is a real student of history. And that is why the world is in such a mess.

HYPERINFLATION FOLLOWED BY A DEFLATIONARY DEPRESSION

I have in many articles outlined the course of events that I see from here – inflation, hyperinflation, debt collapse, asset collapse, leading to economic misery and eventually to a deflationary depression. “All Hell Will Break Loose for Humanity” as I wrote in a recent article.

There will be continued +migration, but probably to a lesser extent since there will be no promised lands which will offer the migrants a better life. There will be isolationism and many countries will try to close their borders.

Sadly there will also be wars, cyber, civil and even major military wars. Mankind has never for any longer period stayed away from wars and especially not in periods of economic depression and high debts. Wars are such a wonderful excuse for poor leaders both to print more money and as a blame for the misery that the people suffer.

Western dominated media and propaganda are naturally blaming Putin for the war. And many leaders including Biden want him gone.

WARS HAVE BUILT THE WORLD

Wars are of course terrible whoever starts them but as I just said, the history of the world is very much based on wars and empire building whether we talk about Persian, Roman, Han, Mongol, Ottoman, Spanish, Russian, or British empires.
Many of these empires have been revered for what they achieved and still are today whilst some like the Mongol left very little positive traces for posterity.

The British Empire for example was remarkable. A small island created the biggest empire in history lasting for over 300 years and covering 26% of the world. The cultural and language influence is still significant.

Very few voices are heard today requiring that the kings or emperors of those eras to be convicted for war crimes posthumously.

The US never created an empire but unprovoked attacked countries like Vietnam, Iraq, Libya and Syria. Over 300,000 civilians have been killed in these wars led by the US.

Whilst virtually the whole Western world considers Putin to be a war criminal, we have not heard similar attacks on the US, UK or French leaders who were involved in the above recent wars.

Without intending to take sides, why should we have different rules or laws for different war criminals? There is clearly not a level playing field.

“Very few, if any, of today’s world leaders understand the consequences of their actions and clearly not Biden.” To even broach this subject in such manner by repeating crap like the above from the FakeSM is to give every one of the fascists named/involved herein an ‘OUT’. They are certainly not getting one from me–NONE OF THEM, worldwide. They are acting on the commands/demands of the WEF/UN/Oligarchs/banksters, commonly known as the globalist criminal cartel, who have leveled the sick vision of their Eugenicists, murderers, thieves and liars onto this beautiful globe. They know exactly what they are doing and why.… Read more »

Spot on. Was just posting essentially the same as you, at the same time.
Obi Wan Ken Obi

Good article and sincere analysis. That is if one is so naive to believe in the illusion that there is something like western democracy, where our governors are chosen by the people or that they are in charge of anything or that they do their best for the people or their nation. The democratic fairy tale is just the context for those that follow the daily news bulletins. The reality is that we live in a demon-ocracy. Where the governors are not selected for their intelligence but for their qualities as actors and their abilities to pretend and to sell… Read more »

“The adults in the room know that all is going to plan.” EXACLY. Precisely correct. Humanity needs adults, not chronologically but mentally. ADULT: A human who is personally responsible for their actions, overtly recognize and refuse the continuous double-speak lying of anyone who proposes evil acts against humanity. Adults think beyond the censorship and propaganda on their TV screen. YOU MUST WAKE UP and BECOME AN ADULT TO BE WITH OTHER ADULTS. Otherwise, you are no more than a directionless child without purpose or meaning. The ruling predators love children (in too many ways) and will be happy to assign… Read more »

[…] New World Disorder And The Demise Of Capitalism […]

[…] New World Disorder And The Demise Of Capitalism […]