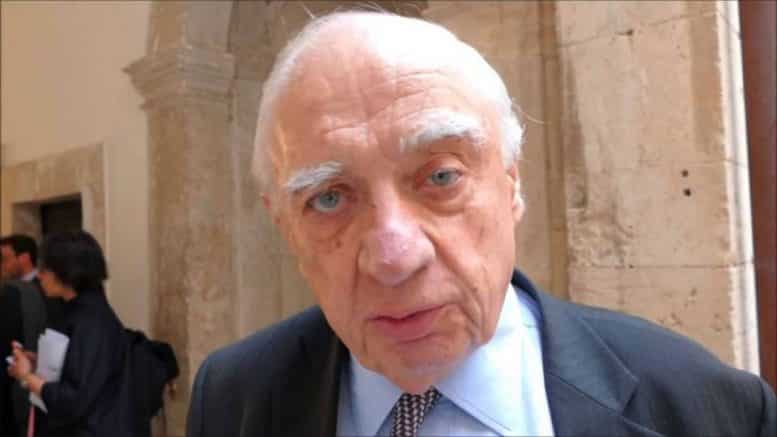 Peter Sutherland was the point-man for the Trilateral Commission’s effort to establish its New International Economic Order and served as its Chairman and Honorary Chairman of the European Group for many years.

He was the undisputed architect of Europe’s disastrous immigration policy which many have called an intentional ‘immigration invasion’ of Europe. His appointment to the United Nations Special Representative of the Secretary-General for International Migration in 2006 lasted until 2017. During those early years, Sutherland hammered on EU member-states to set liberal immigration quotas and after the Islamic invasion was straining Europe’s resources and patience, he ‘enforced’ those same nations to honor their original quotas.

In April 2016 I wrote about Sutherland in Sustainable Development, Migration And The Multi-Cultural Destruction Of The Nation State. I documented Sutherland’s subsequent indifference to the suffering caused by his migration invasion of Europe when he stated,

An advocate of the Trilateral Commission’s 1973 doctrine of ‘interdependence’, Sutherland wrote in Migration is Development in 2013,

“…there is no greater symbol of the world’s growing interdependence than the movement of people. If we can make meaningful economic progress in the coming generations, one of the pivotal reasons will be that people are allowed to move more freely. Advanced countries, with their adverse demographic trends, need migrants, as do developing countries ― not only for migrants’ economic contributions, but also for the social and cultural diversity that they bring.” [emphasis added]

The Independent (Ireland) opined Peter Sutherland’s passing with the headline, The brightest star has dimmed, but Peter’s light will be with us forever.

Otherwise, his death has not received the outburst of global sympathy that one might expect. While most populists in Europe would welcome Sutherland demise, indifference to his passing is the sharpest rebuke that could be given to his life’s achievements.

Good, 1 down and much more to go, Thanks for the good news.

Great news. I hope Sutherland rots in the hottest corner of hell with his boss David Rockefeller. The two Satanic pieces of NWO garbage deserve each other. May they rest in agony.

Get the book “The Globalists” authored by Dennis L.Cuddy,Ph.D and read it several times if you to know about several hundred quotes that confirm the globalists, treasonous agenda.