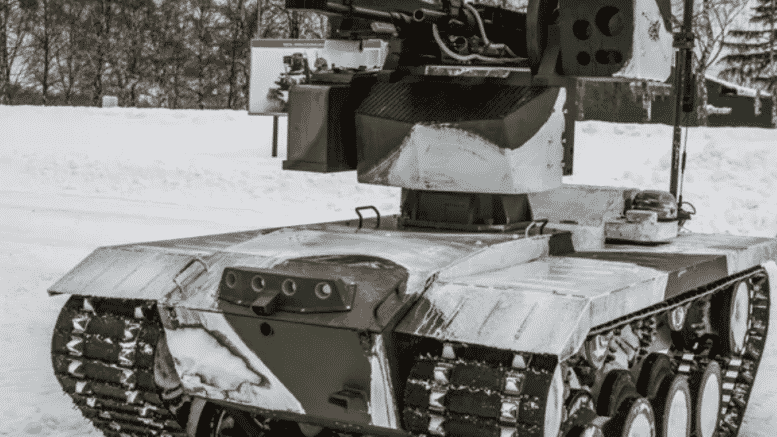 Once standardized, these robots could roll off assembly lines like automobiles; their application on the battlefield will automate the killing of humans by an order of magnitude over WWI and WWII. Technocrats invent because they can, not because there is a need. ⁃ TN Editor

The Russian military will field a new armed tank-like robot that “outperformed” manned platforms in recent exercises at the Alabino proving grounds outside Moscow.

The robot, called the Nerehta, can carry a 12.7mm or 7.62mm machine gun or an AG-30M grenade launcher. The Russian colonel did not say which manned platforms the Nerehta outperformed, but among his service’s vehicles of similar size and armament are the BRDM reconnaissance vehicle and GAZ Tigr.

Russians are testing a wide variety of UGVs, from small IED-disposal robots up to large armed ones, said Samuel Bendett, an associate research analyst with the Center for Naval Analyses’ International Affairs Group.

“They have also been stating for a while that their modernization and state armaments program will include high-tech and unmanned systems,” Bendett said.

The Russian military has also created a larger semi-autonomous tank called the T-14, which sports a remotely operated turret.

Half a world away, unmanned ground vehicles are also on the mind of Gen. Mark Milley, chief of staff of the U.S. Army. Trends in autonomy and robotic battle systems are proceeding faster than many realize, Milley said Tuesday at the Army’s CyCon event in downtown Washington, D.C.