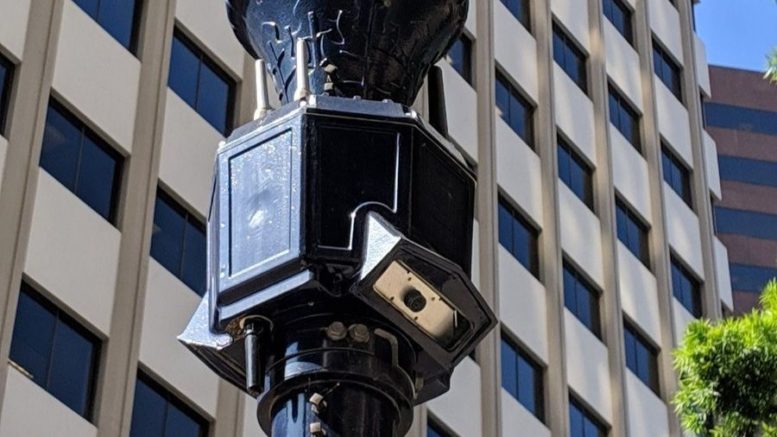 Please Share This Story!
PDF 📄
While police are regularly catching a few perpetrators on video, it has done so at the cost of ubiquitous surveilling all citizens in San Diego. ⁃ TN Editor

When police stopped a taxicab early one morning last summer to find Jonathan Hernandez armed with a handgun and fleeing the scene of a fatal Gaslamp Quarter shooting, authorities thought it was an open-and-shut case.

Hernandez was booked into jail on suspicion of murder, but the investigation from last August would take an unexpected turn.

“Obviously, with any of these investigations there’s a great deal of follow-up to do, but it seemed pretty straightforward at that time,” said Sgt. Louis Maggi with the San Diego Police Department homicide unit.

The next day, police investigators went out to 5th Avenue and Market Street, where witnesses said a vicious fight had led to the killing. Officers canvassed the area for video of the incident when they noticed a camera built into a streetlamp at the intersection.

San Diego has installed thousands of microphones and cameras in so-called smart streetlamps in recent years as part of a program to assess traffic and parking patterns throughout the city.

The technology over the last year caught the attention of law enforcement last year. When police officers picked up Hernandez last summer, they had never used a streetlamp camera in an investigation.

Today, such video has been viewed in connection with more than 140 police investigations. Officers have increasingly turned to the footage to help crack cases, as frequently as 20 times a month.

Police Department officials have said that the video footage has been crucial in roughly 40% of those cases.

The smart streetlamps have been “game changing,” said Lt. Jeffrey Jordon, who oversees the program for the department.

“We’ve had a lot of success stories recently, a couple of convictions where people have actually seen the video through a defense attorney and they immediately took a guilty plea rather than go to trial,” he said.

At the same time, the technology may have saved the 24-year-old Hernandez from a long prison term. A review of the video showed the man he shot had first violently attacked him with a folding sidewalk street sign. At one point, the metal and wood sign struck the streetlamp that was recording, giving officers a good sense of how hard the attacker was swinging.

“Once we had that footage, we could see as clear as day what had actually transpired,” Maggi said.

Prosecutors decided the shooting was self-defense and the homicide charges were dropped.

Privacy groups have voiced concerns about a lack of oversight as law enforcement has embraced the new technology.

Groups, such as the American Civil Liberties Union, have pushed city councils across the country to adopt surveillance oversight ordinances that create strict rules to regulate use of everything from license plate readers to gunshot-detection systems to streetlamp cameras.

The city installed the recording system as part of an LED upgrade to its streetlamps. Officials have said the new bulbs will save enough money on electricity to pay for the roughly $30 million program by 2030.

Three years later, it’s still unclear what the data will ultimately be used for. One idea has been that the information, which is publicly available to web developers and others, will fuel an app that helps people find empty parking spaces. City officials have said they also hope to use the system to track parking meter violations, as well as the number of people using bike lanes.

Right now, only the Police Department has the authority to view the actual video footage, according to officials. Although subject to change, the department’s internal policy says footage should be reviewed only in connection with violent crimes.

Authorities said that direct access is currently restricted to roughly 100 investigative officers in the sex crimes, robbery, traffic, internal affairs and homicide units. Other members of the department’s more than 1,800 sworn officers can request access but must be cleared by a designated authority before they view footage.

This arrangement has disturbed Matt Cagle, a technology and civil liberties attorney with the ACLU.

“This sounds like the quote ‘just trust us’ approach to surveillance technology, which is a recipe for invasive uses and abuse of these systems,” he said. “There needs to be meaningful oversight and accountability.

“Decisions about how to use surveillance technology should not be made unilaterally by law enforcement or another city agency,” he added

San Diego Mayor Kevin Faulconer declined an interview for this story, but a spokesperson for his office said in an email that a citywide policy to regulate use of the microphones and cameras in streetlamps is “under development.”

City Councilwoman Monica Montgomery, who chairs the Public Safety and Livable Neighborhoods Committee, said in an email that she’s “open to exploring” oversight of the program.

“Technology is advancing at a rapid pace,” she said. “As elected officials, we have to not only keep up with the increasing developments, but also ensure that the civil rights and civil liberties of our residents are protected.”

Thirteen cities and counties in the United States have adopted a version of the ACLU’s proposed surveillance oversight legislation, including San Francisco; Oakland, Calif.; and Seattle, according to the group’s website. California is also considering a statewide bill.

Suggested guidelines include mandating a public process to review technology before it’s implemented, as well as conducting regular audits of existing systems to document how the surveillance technologies are being used and potentially abused.

San Diego’s Police Department has diligently responded to concerns about the program in recent months, reaching out to elected officials and holding regular community forums.

“We don’t have a room set up where anybody’s watching this,” Jordon told members of the San Diego City Council at a public meeting in June.

Jordon has overseen the department’s implementation of the program from its inception last year.

Among other things, he’s in charge of monitoring who’s using the video and compiling a publicly available log that lists every case in which video has been viewed, including the date, time and location of an incident. The document also identifies the supervising officer and the offense a suspect was charged with.

Jordon said the cameras do not record private property or use facial recognition or license plate reading technology.

The video is stored on the device and erased every five days if not downloaded for an investigation, police said.

The smart streetlamps are also not recording audio, Jordon said, although they do have the capability. He said they could be used as part of the gunshot-detection system known as ShotSpotter, but that would be subject to council approval.

Although video has been shared with federal agents involved in local task forces, Jordon has assured elected leaders that the footage has never been used to enforce immigration rules.

“This is not a tool to be involved in homeland security as far as border patrol and being involved in enforcing immigration laws outside of our policy,” he said at the June meeting.