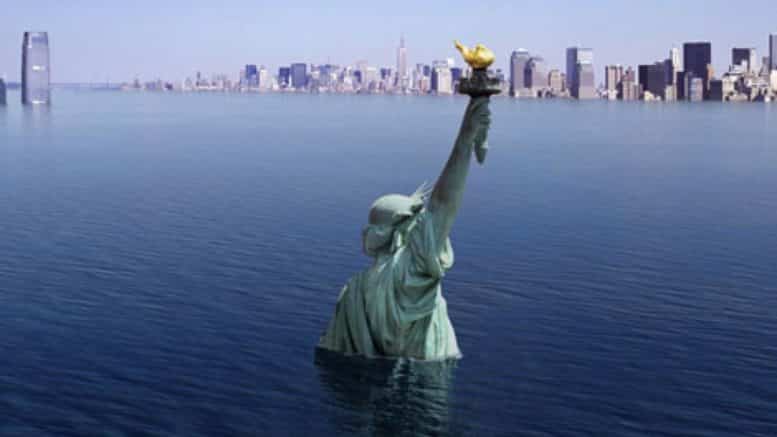 Please Share This Story!
PDF 📄
Rising sea levels due to climate change has been thoroughly debunked by top scientists, but this doesn’t change the scare-mongering rhetoric to drive massive spending to stop it.

In 2009, the Telegraph headlined Rise of sea levels is ‘the greatest lie ever told’ and wrote:

“But if there is one scientist who knows more about sea levels than anyone else in the world it is the Swedish geologist and physicist Nils-Axel Mörner, formerly chairman of the INQUA International Commission on Sea Level Change. And the uncompromising verdict of Dr Mörner, who for 35 years has been using every known scientific method to study sea levels all over the globe, is that all this talk about the sea rising is nothing but a colossal scare story.“

In other words, the claim that there is “scientific consensus” on rising sea levels is completely fabricated in order to drive Sustainable Development, aka Technocracy. ⁃ TN Editor

For cities in the United States, the price of infrastructure projects to combat rising seas and intensifying storms is coming into focus — and so is the sticker shock.

In Boston, where many neighborhoods have been built and recently expanded in low-lying areas, an estimated $2.4 billion will be needed over the next several decades to protect the city from flooding, one study says. That report came as the city abandoned plans to build a harbor barrier that would have cost between $6 billion and $12 billion, which researchers concluded was economically unfeasible.

In Charleston, South Carolina, the mayor said last year that the city, which floods regularly during high tides, had an estimated $2 billion in needed drainage projects.

In Norfolk, Virginia, the Army Corps of Engineers has recommended a $1.4 billion series of seawalls and other infrastructure to protect part of the shoreline. As with many cities, that’s just the start.

n Harris County, home to Houston, planners say $30 billion is needed to provide protection against a 100-year flood. Hurricane Harvey, which in 2017 caused 68 deaths and $125 billion in damages in the state, was the city’s third 500-year-flood in three years.

And in New York City, Mayor Bill de Blasio has proposed a storm surge barrier and floodgates to shield parts of the city and New Jersey from rising waters. The estimated cost: $10 billion.

While the threats to these cities are growing as climate change intensifies, what is not clear is how to pay for projects needed to protect tens of millions of people and trillions of dollars of property. Conservative estimates of the capital investments needed to combat rising seas and worsening storms run into the hundreds of billions of dollars in the coming decades.

The failure to face these costs is the next phase of climate denial,” says Richard Wiles, executive director of the Center for Climate Integrity, an environmental advocacy group that champions forcing polluters to pay for climate crisis costs. “We’ve got to look at this squarely and figure out how to pay for it.”

The center recently issued a study concluding that by 2040, building sea walls for storm surge protection for U.S. coastal cities with more than 25,000 residents will require at least $42 billion. Expand that to include communities under 25,000 people and the cost skyrockets to $400 billion. That’s nearly the price of building the 47,000 miles of the interstate highway system, which took four decades and cost more than $500 billion in today’s dollars.

The research is a rough yardstick because it only considers sea walls, not other ways to mitigate flood risk including buying out homeowners and improving storm water systems. “It’s a deliberate underestimate,” Wiles adds. “We know it will cost more — a lot more.”

For comparison, Wiles notes, protection for Jacksonville, Florida, would cost $3,990 per capita, while in New York the cost would be $231 per capita. Outside cities, the price per person jumps dramatically to $37,366 in Cumberland County, New Jersey, and $154,747 in Dare County, North Carolina.

Globally, the question of equity is even more acute, with cities in developed nations far better able to fund climate change adaptation projects than in developing countries. “In an environment of scarce resources for local authorities, especially in poor countries, mobilizing such resources will be a real political and institutional challenge,” according to a World Bank study.

William Stiles, the head of Wetlands Watch, a Norfolk-based group that advises local governments and non-profits on sea level rise adaptation and floodplain management, says local officials are just coming to terms with the staggering scale of the challenge. State and local money is limited. Resilience bonds, which could fund extensive capital improvements to deal with flooding and sea level rise, have been slow to take off. “There is no coordinated strategy nationally, there is not enough money, states are not moving, and this loose talk of resilience bonds in the private sector is not a reality yet,” Stiles says.

He estimates that Norfolk and neighboring Virginia Beach, hotspots for relative sea level rise on the Atlantic coast, each have about $4 billion in resilience work to do over the next couple of decades. That does not include protecting the port, one of the busiest on the East Coast; the area’s military shipyards; or the world’s largest naval base. A land-use study by the local planning district identified 22 projects, many estimated to run from $10 million to $50 million, including raising roads, improving storm water systems, and making wastewater treatment plants more resilient to serve the six military bases in Norfolk and Virginia Beach.

Funny, banks are still giving out 30 year mortgages, ocean front property is still priced at a premium, and the CRA laughed at me when I told them I wasn’t paying my taxes because the world is going to end soon due to climate change.

Also, why is the Canadian government buying ice breakers????

Ridiculous hoax as usual, they keep yelling fire, fire, and there is no fire. “All the rivers run into the sea; yet the sea is not full; unto the place from whence the rivers come, thither they return again.” Ecclesiastes 1:7. Yes there was a world wide flood and the account of it is in Genesis 6-8. There will not be a world wide flood again because the rainbow is the promise by God. Next time the earth will be destroyed with fire. “But the day of the Lord will come as a thief in the night; in the which… Read more »