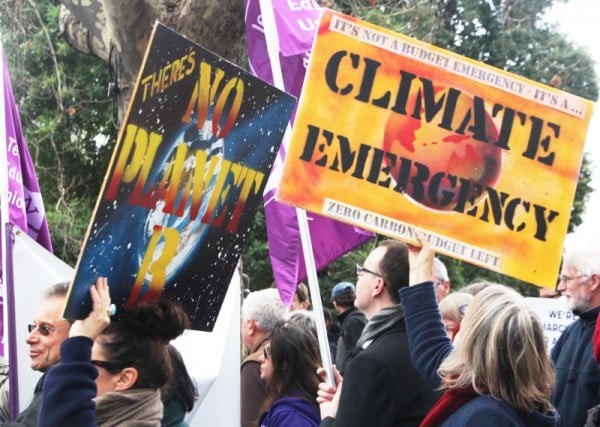 Please Share This Story!
PDF 📄
There are many journalists and scientists today who are writing about the fraudulent nature of global warming dogma, citing verified scientific studies. Nevertheless, the warmist hysteria continues to grow, exhibiting symptoms cult-like behavior. ⁃ TN Editor

The far-left ThinkProgress reports that scientists have finally proven that the theory of man-made Global Warming is a total hoax.
Of course, no one will admit it, but that is exactly what has happened.

A new scientific study shows has revealed the following:

Current CO2 levels of 410 parts per million (ppm) were last seen on Earth three million years ago, according to the most detailed reconstruction of the Earth’s climate by researchers at the Potsdam Institute for Climate Impact Research (PIK) and published in Science Advances.

Three million years ago, we humans were not driving cars or eating the meat that requires cow farts; we weren’t barbecuing or refusing to recycle or building factories; there was no Industrial Age, no plastic, no air conditioning, no electricity, no lumber mills, no consumerism, no aerosols.

In fact, three million years ago, there were probably no human beings on Earth, at least not human in the way we use that term today. And yet…

CO2 levels were the same then as they are now…

But I thought humans warmed the planet? That’s the hustle we’ve been sold for three decades now — you know, that WE are the problem.

We have also been told the problem is DEFINITELY NOT a billions-year-old planet running through cycles where the temperature might fluctuate a bit. Oh, no, that could never be it — so stop saying that could be, you Denier.

Well, what about the Ice Age that occurred thousands and thousands of years before the Industrial Age.

According to the study, scientists also discovered that during this period of Global Warming “there were no ice sheets covering either Greenland or West Antarctica, and much of the East Antarctic ice sheet was gone.”

How is this possible 2,999,971 years before Arnold Schwarzenegger bought his Hummer?

Temperatures were up to 7 degrees Fahrenheit warmer globally, at least double that at the poles, and sea levels were some 20 meters (65 feet) higher.

How is that possible 2,999,945 years before Americans moved to the suburbs and lit up the charcoal grills?

“More CO2 than ever before in 3 million years, shows unprecedented computer simulation 03/04/2019 – CO2 greenhouse gas amounts in the atmosphere are likely higher today than ever before in the past 3 million years. For the first time, a team of scientists succeeded to do a computer simulation that fits ocean floor sediment data of climate evolution over this period of time. Ice age onset, hence the start of the glacial cycles from cold to warm and back, the study reveals, was mainly triggered by a decrease of CO2-levels. Yet today, it is the increase of greenhouse gases due… Read more »

You have put your trust in computer simulations based on made-up or corrupted data sets. Such a combination produces fantasy, not reality. Scientists should spend less time speculating and more time doing real science.