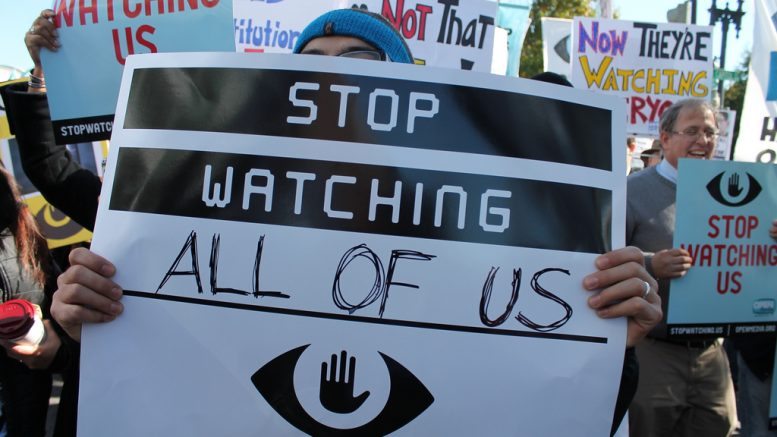 Creative Commons photo of a march against NSA mass surveillance in Washington D.C. on Oct. 26, 2013 by flickr user Elvert Barnes

Please Share This Story!
PDF 📄
Ubiquitous security cameras are recording Americans at an alarming rate. America has one camera for every 4.6 citizen while China has one camera per 4.1 citizens. China-style Technocracy is almost complete in the U.S. and is the biggest risk to the survival of freedom and liberty. ⁃ TN Editor

It seems no matter where we go throughout the day, there’s a camera close by. While passing by a security camera may not shock many people, a new study finds the average person is being filmed more often than they think. From walking the dog to driving into work, researchers say Americans are being caught on security cameras at least 238 times every week.

The report by Safety.com finds that surveillance technology is spreading to every corner of the globe. Studies estimate there will be around one billion security cameras filming worldwide by 2021. Between 10 and 18 percent of those devices will be in the United States.

Where are security cameras watching you?

Safety.com finds much of this weekly surveillance happens on the road. Researchers say the average American is filmed 160 times while driving. One of the biggest reasons for this is the growing number of cameras at major intersections.

Traveling about 29 miles a day on average, researchers say motorists typically drive under 20 cameras over that span. The report cautions that it’s hard to know how many of these devices are permanently storing their recordings or just passively filming to monitor traffic data.

Once you’re done commuting, researchers find the average employee is filmed 40 times a week at or around the office. This number, the study finds, can be drastically higher if a person works in a retail store or in transportation. These workers may be on film hundreds of times every week in comparison to people working where there’s a single security camera at the entrance.

Meanwhile, the average consumer in the U.S. is under surveillance 24 times while out shopping or running errands. Researchers find security cameras are the norm in business today, as merchants crack down on theft and other criminal activity.

Under surveillance in your own home

The study says one of the biggest increases in surveillance is right in a person’s own house. The average American is on film 14 times a week in their house and neighborhood. In the past, researchers believe this number was closer to zero.