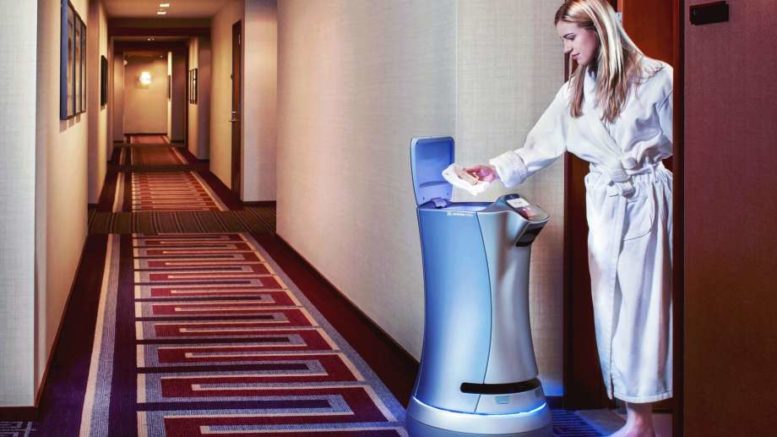 The Technocrat mindset is to invent efficient technology that will displace inefficient humans, but there is no substitute for real human interaction. The sales pitch is always that robots will improve the workplace, but instead they displace workers altogether. ⁃ TN Editor

A couple of months ago, Justin Adsuara was surprised to see a waist-height robot scooting through the hallways of the Embassy Suites by Hilton. The glowing white cylinder was accompanied by an operator teaching it the layout of the new Seattle hotel, similar to training a dog to walk on a leash. Once the robot learns the lay of the land, it could deliver room-service meals or linens to guests.

The Pioneer Square hotel is the only property where the chain is considering using the robot, according to Hilton. But Adsuara, a lobby attendant at the hotel, said even this test phase has stoked “real fear” in the hotel’s food and beverage department, where workers are concerned about job security.

From automated check-in to droids that carry bags to rooms, new technology is transforming the hospitality industry worldwide. As a result, hotel workers around the nation are seeking a say in the introduction of devices that could threaten their jobs.

Embassy Suites employees, represented by UNITE HERE Local 8, are negotiating to include in their first contract with Hilton the right to collectively bargain over the implementation of new technology. Last year, unionized Marriott workers in eight U.S. cities launched the largest hotel strike in U.S. history, one that lasted nine weeks and ended with an agreement, finalized in December, that gives workers some say in the implementation of technology. Last October, Westin Seattle hotel employees represented by UNITE HERE Local 8 reached a tentative deal with Marriott International.

“The biggest tools that we have are to organize and to push for things in our contract that can indirectly mitigate the impacts of technology,” said Adsuara, a member of the union.

From Hilton’s perspective, AI technology is a tool that can help staff enhance the customer experience, said company spokesman Nigel Glennie. He called the robot “something that would support team members.” He added that at this point, “This is a trial by one hotel,” and not something the chain is considering for its other properties.

The contract negotiations between Hilton and the Seattle workers follow months of bargaining between casino companies and  members of the culinary and bartender unions in Nevada, which are affiliates of UNITE HERE. Language in the Nevada contracts that addresses technology was used as a model for negotiations between Marriott International and hotel workers across North America, said UNITE HERE Local 8 president Erik Van Rossum.

“We decided two years ago that if we didn’t push this in negotiations … that we would just be reactive and that there would be no negotiation,” said UNITE HERE president D. Taylor.

Although the hospitality union was in new territory, workers in other industries have long fought for job security in the face of automation. In 1960, the International Longshore and Warehouse Union negotiated a “mechanization and modernization agreement” to ensure job security and generous compensation for workers displaced by the increasing mechanization of the ports.

Remember
Once the jobs are allowed to go robo, they never return. Automakers replaced human labor line spot welders and spray booth painters with robots in the 80’s and 90’s. Made a job bank for displaced workers to go to until openings allowed for the worker to transfer elsewhere. When 2009 bankruptcy occured, the job bank was targeted and dissolved, resulting in less middle class union workers to produce more by the hour, rapid increasing productivity!!!