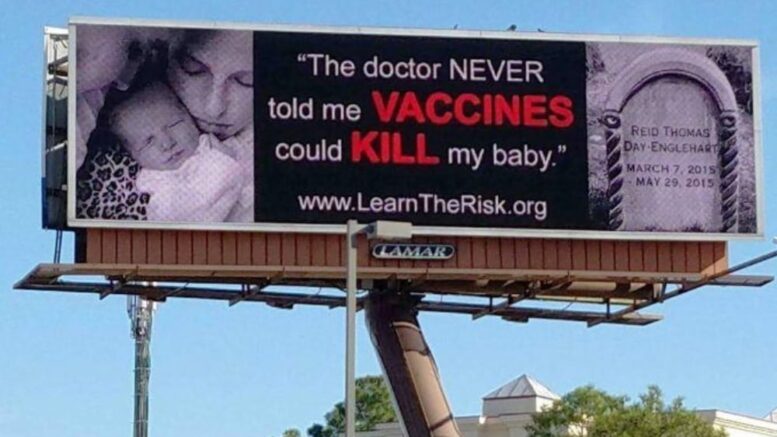 Please Share This Story!
PDF 📄
Technocrat scientists believe that they are in charge of vaccinating humanity for the good everyone and its their responsibility to carry out the mission. As people push back and say “NO!”, these same scientists are incredulous that anyone would not agree with their “science”. ⁃ TN Editor

Tara Granger, 36, has worked as a nurse for two decades in Suffolk County, NY, and she and her two children have been vaccinated every year.

But she’s been questioning the promised upcoming vaccine for COVID-19, in large part because of what she’s witnessed firsthand about the financial incentives for vaccines.

“It scares me that I got so many free lunches and free dinners because I pushed the flu vaccine,” Granger says. “What am I going to get when I push a COVID vaccine?”

Granger got sick from the coronavirus earlier this summer and said she did “the opposite of what people said to do. I took my supplements and vitamins, and didn’t go to the hospital to be put on a ventilator and die. I was smart enough to say, ‘My immune system can fight this, I just have to find the right way to do it.’ ”

Her job will require her to recommend the COVID vaccine when it’s available, but Granger said she won’t personally be getting it.

“The vaccine isn’t something we need, even if it is safe,” she says. “People want an easy solution and they think this is it. But it isn’t.”

She’s not the only one with misgivings. A Pew Research poll from late September showed that about half of US adults (51 percent) wouldn’t get a COVID-19 vaccine if it was available today — a big drop from the 72 percent who said they’d get one back in May.

Complicating things even more: This past week, two major drug manufacturers halted their vaccine trials because of safety concerns.

It’s made matters all the more confusing for Rob Holmes, 50, of Marina del Rey, Calif., who said he gets an annual flu shot despite his wife’s reluctance. “I’m starting to think I’m the crazy one,” he tells The Post.

For the first time, he hasn’t gotten a flu shot, and he said he’s “still on the fence” about whether he’ll get a COVID vaccine when it becomes available.

Claudia Torres, a 28-year-old stay-at-home mom and blogger from Miami, feels the same. She said all of her kids are up-to-date on recommended vaccines. “I’m not an anti-vaxxer or think COVID-19 is a hoax,” she says. “But I just don’t want the COVID-19 vaccine.”

Even the rich and powerful are expressing doubt. Elon Musk said in a podcast interview in late September that he won’t be getting a vaccine because he’s “not at risk for COVID, nor are my kids.”

The anti-vax movement is nothing new — in 2019, the World Health Organization listed “vaccine hesitancy” as one of the top-ten threats to global health — but the growing distrust of a vaccine that, at this point, is only hypothetical is a rare cultural phenomenon.

Scott Ratzan, a physician and medical misinformation expert at the City University of New York and Columbia University, says anti-COVID vaccine sentiment is the result of “a massive assault on trust in government, in science and in public-health authorities.”

The misinformation has mostly been spread online, thanks to social media and the controversial documentary “Plandemic,” in which discredited virologist Judy Mikovits claims a hypothetical COVID vaccine would “kill millions.”

“Throw in QAnon and people’s increasing impatience with the effect of the disease on their lives and livelihoods, and you have fertile ground to sow anti-science propaganda,” says Ratzan. “It’s been like manna from heaven for hardcore anti-vaxxers.”

The usual anti-vax tropes — religious objections, concerns that vaccines cause autism — aren’t behind most COVID-19 vaccine concerns. According to an August survey from STAT and the Harris Poll, 78 percent of Americans are worried that a COVID-19 vaccine is being influenced more by politics than science.

It’s a largely bipartisan opinion: 72 percent of Republicans and 82 percent of Democrats don’t trust a vaccine pushed by politicians, regardless of their party affiliation.

Boy you really like to hit Judy Mikovits don’t you. She was wronged but I guess you all like to take your shots at her don’t you! The c19 is a scamdemic which has been hyped totally out of control. The corrupt WHO and the equally corrupt CDC has already admitted that the number of deaths has been falsified up to 94% and you are shitting on Dr. Mikovits. Unbelievable! Also… the vaccines are invented to make scumsucking murderers like Kill Gates even more rich and vile than he already is. These people want to depopulate the world down to… Read more »

Jo – You apparently know very little about Technocracy News. The point of this article is to show that the anti-vax/ex-vax movement is of great concern to the perpetrators of global/mandated vaccines. This is what THEY say. Please pay attention to the Editor’s comments at the top of every article so that you understand the context for posting. – The Editor

Jo, we are all supporters of Dr. Mikovits and Rashid Buttar and Del Bigtree and Dr. Mercola and all doctors and others who have a conscience and aren’t simply driven by the profit motive.

Why would the lying liars even expect the more awake public to ever trust them? I certainly don’t and it appears many in the medical and scientific fields don’t either and that raises plenty enough suspicion for me to opt out of any vaccine not just this one.

I retell my story whenever I can. One flu vaccine, in my 30’s, for my job, sent me into Cardiac Arrest. A divine miracle of God that I’m alive and walking today. I will never, ever take another vaccine! End of sentence…period! I’ll report…You decide.

I am an ex-vaxxer, as Dr. Tenpenny says. I believe my firstborn died from the heb B vaccine. She had some traumatic birth injuries; and the doctor, after a short oral debate with himself, decided it would still be safe to give her the vaccine. She died less than four weeks later. Her autopsy revealed high white blood cell count and abnormalities with her liver. I didn’t connect her death with the vaccine until years later. My oldest son had a tumor in his femur before he was 10. It took 2 years, a numerous doctors, and my son losing… Read more »

First off, I’m not familiar with the NY Post. But based on the tenor of the article, it appears to be solidly “mainstream media”. As such, I would like to point out some of the mind-control techniques that aware people “can’t help but notice”. In the context of the article, “anti-vaxxer” is framed as a pejorative term, clearly for the purpose of discrediting such people. SOME of those people might be more correctly identified as “vaccine safety advocates”. But no matter… The technique is “guilt by association”. Essentially the powers-that-[shouldn’t]-be lump people together in the same basket. So to shut… Read more »

Imho we the public do not have ““a massive assault on trust in government, in science and in public-health authorities.” We, the ones with eyes wide open and tuned into our intuition are researching the science for ourselves and recognising that the numbers just don’t add up when it comes to the danger of CV. We trust the science. NOT the governments and PHA’s.

Dr. Judy Mikovits has NOT been discredited, I don’t care what the idiot Ratzan says. That’s a great name for him! He’s a rat for the medical gurus – – actually, he’s more of a mole from the sound of his words. Clearlly he’s “selling something”.

Don’t let the headline fool you. >>> The government also confirmed to CTV News Toronto that the provincial government, municipalities, public health officials and politicians would be potentially shielded from litigation — dating back to Mar. 17 when the government enacted a state of emergency. See what’s really going on? https://toronto.ctvnews.ca/new-ford-government-legislation-could-protect-long-term-care-homes-province-from-covid-19-lawsuits-1.5153071

With the horrible track record of medical fascists, politicians and bureaucrats. I’m baffled as to why they would wonder why anyone would distrust them. The people can’t even be trusted to provide uncontaminated covid19 test kits to the public. For those who haven’t heard. It was reported that the CDC recalled some covid19 contaminated test kits about 6 months ago. The test kits I hear were stored in an covid19 contaminated environment. No telling how many people were tested with covid contaminated test kits, and caught the virus that way. These deluded dreamers can keep themselves and their witches brews… Read more »