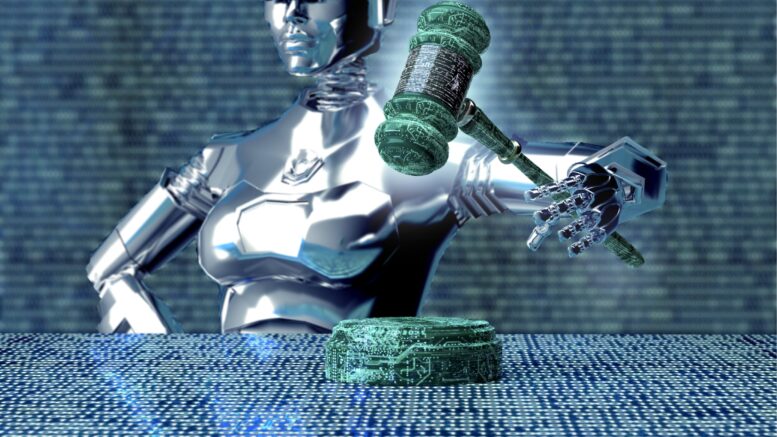 Please Share This Story!
PDF 📄
Justice is an exclusively human concept that cannot be replaced by anything non-human, including Artificial Intelligence. It is dangerous that AI scientists work today with views that they can replace all things human with computer algorithms. ⁃ TN Editor

Robot judges that can determine guilt or innocence will be commonplace in the English legal system within 50 years, experts have claimed.

Scientists say the the bots will be able to conclude whether someone is guilty or innocent with a 99% accuracy rate by analysing body language.

One believes the physical and psychological signs of dishonesty will be identified using an array of cameras.

Signs that signal “wrongdoing or probable falsehoods” could include irregular speech patters, an increase in body temperature and hand and eye movements.

Data collected from the robots will then be analysed using AI to build an almost “error-free” and unbiased picture of whether a defendant or witness is telling the truth.

Within 50 years, the bots could replace human judges and become a common feature in criminal and civil hearings in England and Wales, according to a two-year study Terence Mauri.

Mauri, who runs the London-based policy institute Hack Future Lab, said AI in the courtroom carries “great promise” for the legal industry – and for those wrongly accused of crimes.

Mr Mauri said: “AI has created unprecedented changes in the way that people live and work by performing complex problems with a level of consistency and speed that is unmatched by human intelligence.

“In a legal setting, AI will usher in a new, fairer form of digital justice whereby human emotion, bias and error will become a thing of the past.

“Hearings will be quicker and the innocent will be far less likely to be convicted of a crime they did not commit.”