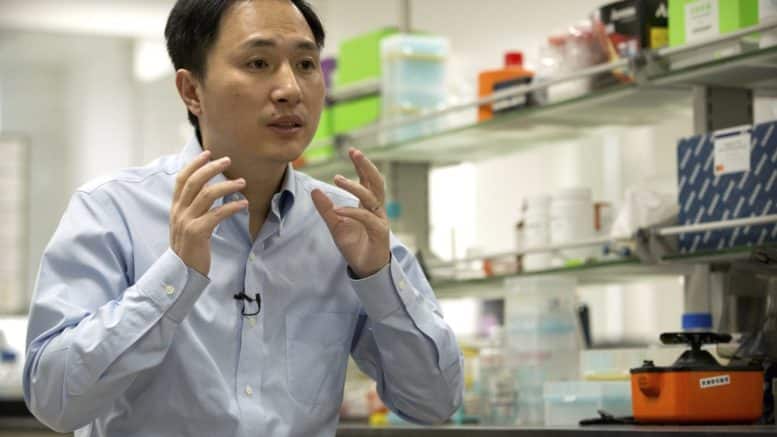 Please Share This Story!
PDF 📄
Proving that all scientists are not Technocrats, many have condemned He Jiankui for introducing gene modifications into the human germline, meaning his changes will perpetuate to succeeding generations.  ⁃ TN Editor

A Chinese researcher claims that he helped make the world’s first genetically edited babies — twin girls born this month whose DNA he said he altered with a powerful new tool capable of rewriting the very blueprint of life.

If true, it would be a profound leap of science and ethics.

A U.S. scientist said he took part in the work in China, but this kind of gene editing is banned in the United States because the DNA changes can pass to future generations and it risks harming other genes.

Many mainstream scientists think it’s too unsafe to try, and some denounced the Chinese report as human experimentation.

The researcher, He Jiankui of Shenzhen, said he altered embryos for seven couples during fertility treatments, with one pregnancy resulting thus far. He said his goal was not to cure or prevent an inherited disease, but to try to bestow a trait that few people naturally have — an ability to resist possible future infection with HIV, the AIDS virus.

He said the parents involved declined to be identified or interviewed, and he would not say where they live or where the work was done.

There is no independent confirmation of He’s claim, and it has not been published in a journal, where it would be vetted by other experts. He revealed it Monday in Hong Kong to one of the organizers of an international conference on gene editing that is set to begin Tuesday, and earlier in exclusive interviews with The Associated Press.

“I feel a strong responsibility that it’s not just to make a first, but also make it an example,” He told the AP. “Society will decide what to do next” in terms of allowing or forbidding such science.

Some scientists were astounded to hear of the claim and strongly condemned it.

It’s “unconscionable … an experiment on human beings that is not morally or ethically defensible,” said Dr. Kiran Musunuru, a University of Pennsylvania gene editing expert and editor of a genetics journal.

“This is far too premature,” said Dr. Eric Topol, who heads the Scripps Research Translational Institute in California. “We’re dealing with the operating instructions of a human being. It’s a big deal.”

“I think this is justifiable,” Church said of that goal

In recent years scientists have discovered a relatively easy way to edit genes, the strands of DNA that govern the body. The tool, called CRISPR-cas9, makes it possible to operate on DNA to supply a needed gene or disable one that’s causing problems.

It’s only recently been tried in adults to treat deadly diseases, and the changes are confined to that person. Editing sperm, eggs or embryos is different — the changes can be inherited. In the U.S., it’s not allowed except for lab research. China outlaws human cloning but not specifically gene editing.

He Jiankui (HEH JEE’-an-qway), who goes by “JK,” studied at Rice and Stanford universities in the U.S. before returning to his homeland to open a lab at Southern University of Science and Technology of China in Shenzhen, where he also has two genetics companies. The university said He’s work “seriously violated academic ethics and standards” and planned to investigate. A spokesman for He confirmed that he has been on leave from teaching since early this year, but he remains on the faculty and has a lab at the school.

The U.S. scientist who worked with him on this project after He returned to China was physics and bioengineering professor Michael Deem, who was his adviser at Rice in Houston. Deem also holds what he called “a small stake” in — and is on the scientific advisory boards of — He’s two companies.

The Chinese researcher said he practiced editing mice, monkey and human embryos in the lab for several years and has applied for patents on his methods.

From The Mirror (UK) ⁃ TN Editor

A scientist from China claims to have created the world’s first genetically edited babies.

He Jianhui, a scientist at the Southern University of Science and Technology of China in Shenzhen, says he altered the DNA of twin girls to prevent them from future infection with HIV.

During his controversial study, Mr He claims he altered embryos for seven couples during IVF treatment, with one successful pregnancy.

However, his ‘research’ is yet to be independently confirmed by anyone else.

Speaking to the Associated Press, Mr He said: “I feel a strong responsibility that it’s not just to make a first, but also make it an example.

“Society will decide what to do next.”

The twins’ father had HIV, while their mother did not. To prevent the twins from infection, Mr He says that he disabled a gene called CCR5.

The controversial technique has been highly criticised by other experts.