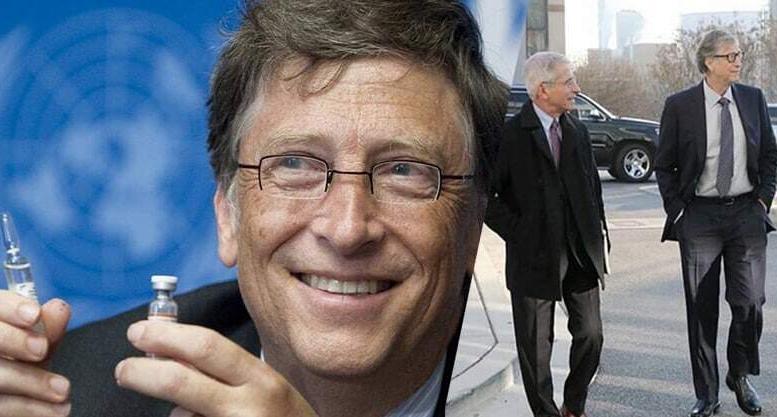 If there is a tight-knit group of Big Pharma organizations working together toward a global monopoly over health care, then Bill Gates and the Bill & Melinda Gates Foundation are the titular heads.

To a Technocrat, whatever the problem is, science has the answer. Nobody else could possibly have an answer if it isn’t science-driven.

COVID-19 is now generally seen as a creation of highly-skilled geneticists, meaning that its was created by science, even if the details are still unknown. Other scientists have risen to say that science has the answer: mass vaccination of the entire population of the world to build ‘herd immunity’. No matter that such a vaccine hasn’t been invented yet because Technocrats have a pollyanna-ish hallucination that future innovation will always bail them out.

This is akin to rubbing the genie’s lamp in hopes that their exact wish will be magically fulfilled.

But, who can say that one crackpot scientific outcome will not give way to another just as bad? Of course, no one.

The people of the world want to be safe from COVID-19, but they had better be careful what they wish for because what they are going to get is forced vaccinations that will make permanent changes to their physical bodies and minds.

In the  article below, Robert F. Kennedy, Jr. delivers a scathing report on the bumbling science of Bill Gates and his Bill & Melinda Gates Foundation. Read it carefully.

Vaccines, for Bill Gates, are a strategic philanthropy that feed his many vaccine-related businesses (including Microsoft’s ambition to control a global vaccination ID enterprise) and give him dictatorial control of global health policy.

Gates’ obsession with vaccines seems to be fueled by a conviction to save the world with technology.

Promising his share of $450 million of $1.2 billion to eradicate Polio, Gates took control of India’s National Technical Advisory Group on Immunization (NTAGI) which mandated up to 50 doses (Table 1) of polio vaccines through overlapping immunization programs to children before the age of five. Indian doctors blame the Gates campaign for a devastating non-polio acute flaccid paralysis (NPAFP) epidemic that paralyzed 490,000 children beyond expected rates between 2000 and 2017. In 2017, the Indian government dialed back Gates’ vaccine regimen and asked Gates and his vaccine policies to leave India. NPAFP rates dropped precipitously.

In 2017, the World Health Organization (WHO) reluctantly admitted that the global explosion in polio is predominantly vaccine strain. The most frightening epidemics in Congo, Afghanistan, and the Philippines, are all linked to vaccines. In fact, by 2018, 70% of global polio cases were vaccine strain.

In 2010, the Gates Foundation funded a phase 3 trial of GSK’s experimental malaria vaccine, killing 151 African infants and causing serious adverse effects including paralysis, seizure, and febrile convulsions to 1,048 of the 5,949 children.

In 2010, Gates committed $10 billion to the WHO saying, “We must make this the decade of vaccines.” A month later, Gates said in a Ted Talk that new vaccines “could reduce population”. In 2014, Kenya’s Catholic Doctors Association accused the WHO of chemically sterilizing millions of unwilling Kenyan women with a  “tetanus” vaccine campaign. Independent labs found a sterility formula in every vaccine tested. After denying the charges, WHO finally admitted it had been developing the sterility vaccines for over a decade.  Similar accusations came from Tanzania, Nicaragua, Mexico, and the Philippines.

A 2017 study (Morgenson et. al. 2017) showed that WHO’s popular DTP vaccine is killing more African children than the diseases it prevents. DTP-vaccinated girls suffered 10x the death rate of children who had not yet received the vaccine. WHO has refused to recall the lethal vaccine which it forces upon tens of millions of African children annually.

Global public health advocates around the world accuse Gates of steering WHO’s agenda away from the projects that are proven to curb infectious diseases: clean water, hygiene, nutrition, and economic development. The Gates Foundation only spends about $650 million of its $5 billion dollar budget on these areas.  They say he has diverted agency resources to serve his personal philosophy that good health only comes in a syringe.

In addition to using his philanthropy to control WHO, UNICEF, GAVI, and PATH, Gates funds a private pharmaceutical company that manufactures vaccines, and additionally is donating $50 million to 12 pharmaceutical companies to speed up development of a coronavirus vaccine. In his recent media appearances, Gates appears confident that the Covid-19 crisis will now give him the opportunity to force his dictatorial vaccine programs on American children.

We live in interesting times for sure.
I relate what is about to happen will be similiar to the 1930’s in Germany – America is about to get its “slap a yellow star on a Jew” moment. Only this time it will be those refusing this mandatory, experimental Vaccine (look it up – this new vaccine will be with different vaccine technology).

After being lock up for months, several times in a 18 month period (like they are proposing) will uncertainly lead to near zero resistance of the sheeple.

No patriot men of fighting age to org. and resist globalism and take country back to constitution, yet people are buying up guns.

SIGN THE PETITION. SAY NO TO A COMPULSORY VACCINATION.

Revelation 19:20 But the beast was captured, and with it the falseprophet who had performed the signs on its behalf. With these signs he had deluded those who had received the mark of the beast and worshiped its image. The two of them were thrown alive into the fiery lake of burning sulfur.   Revelation 13:16-17 New International Version (NIV)16 It also forced all people, great and small, rich and poor, free and slave, to receive a mark on their right hands or on their foreheads,17 so that they could not buy or sell unless they had the mark, which is the… Read more »

here in Germany “Chancellor” Merkel has officially proclaimed that the pandemic will only be over once the vaccination has been found! We all fear that the vaccine will be mandatory once it does come out. These are bad times for the few that are awake here.

The EU parliament is an outpost of the Illuminati and Angela Merkel is their main rep. A doctor by the name of Merkele did horrific experiments during WW2 on Jews. He was named the “Angel of death”. Angel…Angela. Mengel…Merkel. Accidental similarities?

She’s getting a nice fat wad of cash from fellow nazi Gates ..of Hell

The Bible is history written in advance…want to know what is going to happen. Read the book. The prophetic verses of scripture that could be fulfilled have been right every time. Hmmm? If there were a financial person who had a perfect track record, would you trust that person with your investments.