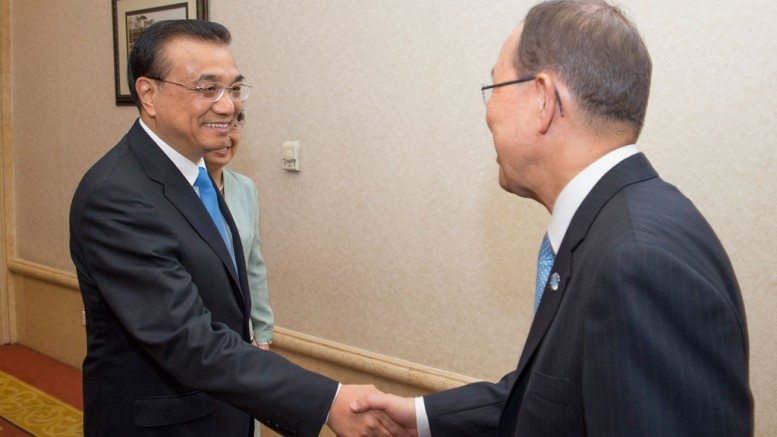 China is one of the dirtiest nations on earth, yet the UN is consistently enamored with its Technocratic and totalitarian leadership. Christiana Figueres, former UN climate chief, praised China in 2015 for its great accomplishments in fighting global warming. All praise aside, China’s environmental record is a total abomination.  ⁃ Technocracy News Editor

United Nations Secretary-General Ban Ki-moon today met with Chinese Premier Li Keqiang in Beijing, where he welcomed China’s efforts towards the 2030 Agenda for Sustainable Development, as well as its support to other countries in their own implementation.

During the meeting, the Secretary-General also expressed hope regarding China’s continued leadership and multilateral engagement in support of resolving regional and global challenges and said that he looked forward to welcoming the Premier at the 71st General Debate and High-Level session of the UN General Assembly in September.

Mr. Ban also related his appreciation for China’s leadership of the G20 and its focus on inclusive economic growth and sustainable development as key points on the G20 agenda during China’s presidency of the body.

He also expressed appreciation at Premier Li’s commitment that China will ratify the Paris Agreement before the G20, and asked him to encourage other UN Member States to ratify the accord in 2016.

The Secretary-General also expressed his condolences for the lives lost during the recent hurricane and heavy rainfalls that brought devastation to many provinces and commended the Premier’s personal engagement in the Government’s relief efforts.

Mr. Ban also met with the State Councillor Yang Jiechi, and the two discussed global and regional concerns, ranging from response to health crises, development in Africa, and the threat of extremism and terrorism.