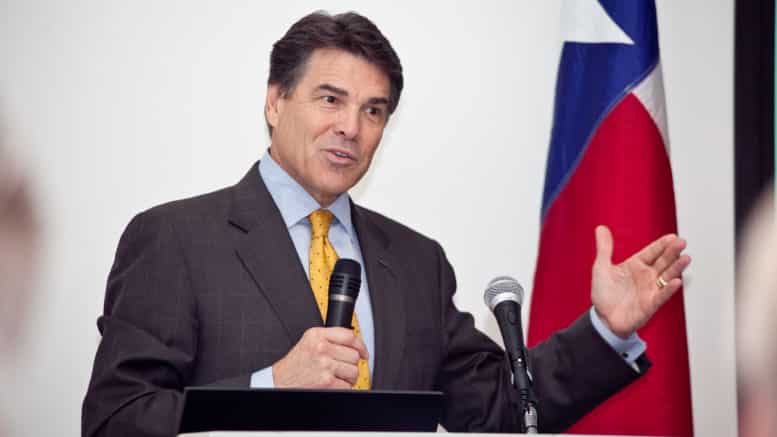 Ex-Governor of Texas Rick Perry was appointed Secretary of Energy by President Donald Trump on March 2, 2017.

Even though President Trump has withdrawn from the Paris Climate Accord on global warming, apparently Secretary Perry has not gotten word, for the Department of Energy’s web page on Climate Change is still present on the Energy.gov website, which prominently states,

Addressing the effects of climate change is a top priority of the Energy Department. As global temperatures rise, wildfires, drought, and high electricity demand put stress on the nation’s energy infrastructure. And severe weather — the leading cause of power outages and fuel supply disruption in the United States — is projected to worsen, with eight of the 10 most destructive hurricanes of all time having happened in the last 10 years.

The Climate Change page presents a map of “How Climate Change Threatens America’s Energy Infrastructure in Every Region.” Then it displays a globe with the heading, “Energy Exascale Earth System Model” (E3SM) and explains that,

E3SM is a modeling, simulation, and prediction project that optimizes the use of DoE laboratory resources to meet the science needs of the nation.

Even in light of this, it is still puzzling to some why the world’s most powerful supercomputer is being created by the DoE to realize the “full potential of AI.”  According to an article in The Next Web,

The US Department of Energy (DoE) has announced it’s setting aside $600 million to build the world’s fastest supercomputer called Frontier. It will be jointly developed by AMD and Seattle-based supercomputer specialist Cray.

The Frontier supercomputer will be capable of completing more than 1.5 quintillion calculations per second, and will join Aurora to become the second of the two exascale systems planned by US DoE for 2021.

This must somehow be reconciled to the DoE’s very simple Mission Statement also displayed on its website:

The mission of the Energy Department is to ensure America’s security and prosperity by addressing its energy, environmental and nuclear challenges through transformative science and technology solutions.

Certainly the Frontier project is “transformative”, but why on earth does the DoE need the fastest AI computer in the world? And, what does it intend to do with it?

Enter Smart Grid. We know from the above that the DoE is “working to dramatically increase the efficiency of appliances,  homes, businesses and vehicles.” The continuous and personal data stream collected from the nation’s grid is the perfect input for such an AI super-computer to control the whole system from a single location. When President Obama (a Democrat) unleashed the Smart Grid program in 2009, the goal of micro-managing the country’s energy usage was in plain view, and it soon may be finally realized in practice, with Secretary Rick Perry (a Republican ) taking the credit.

The origin of the entire Smart Grid concept is found in the DoE’s Bonneville Power Administration (BPA), created in 1937 and located in Pacific Northwest. Historically, the BPA was saturated with early Technocrats because of its deep involvement with hydroelectric power. In the early 1990s, the BPA took credit for having coined the term, “Energy Web”, which later became “Smart Grid”.

Another globalist project that Rick Perry took credit for dates back to his tenure as Governor of Texas, when he tried to force the so-called Trans-Texas Corridor (TTC) into existence between 2001 and 2010 as part of the North American Union (NAU) initiative engineered by President George Bush, Mexican President Vincente Fox and Canadian Premier Paul Martin.

The NAU was a springboard from the North American Free Trade Agreement (NAFTA) to create a continental area comparable in design to the European Union. The TTC was to be a super-corridor 1,200 feet wide that carried tollways, rail and utility lines, stretching from the Mexican border to Oklahoma and ultimately to Kansas City.

The TTC was envisioned as an extensive network of Public-Private Partnerships that would have allowed global corporations to charge tolls for transit of not only freight delivered up by rail from Mexico, but also for services such as water, electricity, natural gas and fiber optic lines. It would have been one of the largest eminent domain land-grabs ever conducted, with the ultimate seizure of 584,000 acres of land held privately, mostly by ranchers and farmers. 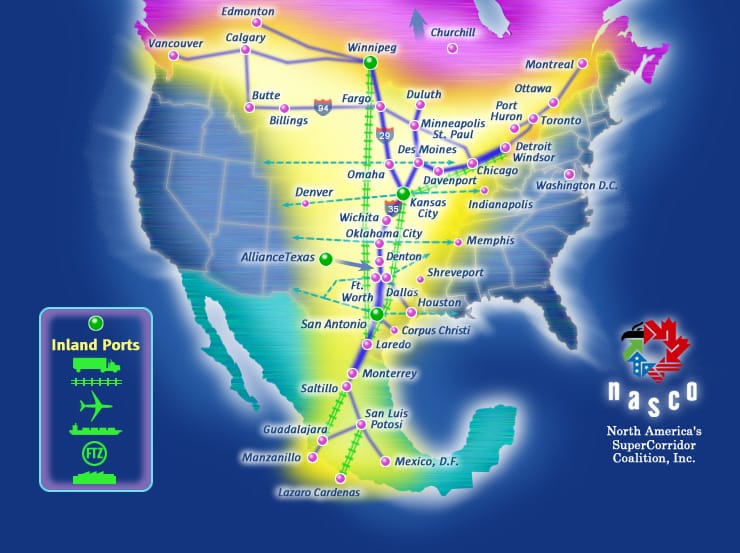 After the plan was exposed to the American public, the uproar and protest was so great that the entire TTC project was ultimately terminated along with the NAU. Much of the credit went to Oklahoma as its legislature refused to let the super-corridor pass into its territory from Texas.

Although Governor Perry tried to dodge the political bullet for the whole episode, Texas Department of  Transportation documents released in 2002 stated that,

This is the same Rick Perry who today, as Secretary of Energy, is attempting to build the world’s fastest super-computer to realize the “full potential of AI.” Although Frontier will undoubtedly be shared with other government agencies, NGOs and private researchers, Technocrats within the DoE will have the ultimate tool to assert total control over all energy converted and consumed in the United States.

Flashback – How The Trilateral Commission Converted China Into A Technocracy

I live in Oak Ridge, Tn, one of the original “Secret” cities for the Manhattan Project. This DOE run town is indeed Technocracy central. While there still is nuclear work going on, it seems there’s been a shift towards AI, since Oak Ridge Nation Lab has been the site for a progression of the World’s fastest super computers – the previous “Titan”, current “Summit”, and now the proposed “Frontier”. https://www.oakridger.com/news/20190509/doe-cray-to-deliver-record-setting-frontier-supercomputer-at-ornl “Coincidentally”, one day before the unveiling of Frontier, one of the world’s biggest AI evangelists – Kai Fu Lee – was in town, touting the amazing “benefits” AI will provide… Read more »

Woah! I didn’t think anyone these days was informed about Oak Ridge, TN. One doesn’t see much about it because the secret place is still secret whether it’s said or not. I am quite close to someone who ‘grew up behind the fence’, as it’s called, during the days of Operation Paperclip. I don’t follow info on Oak Ridge these days but I’ll check out your links.

Ha! The new evangelicals–Ooooo! the Southern Baptists are going to be so P-Oed about the competition.